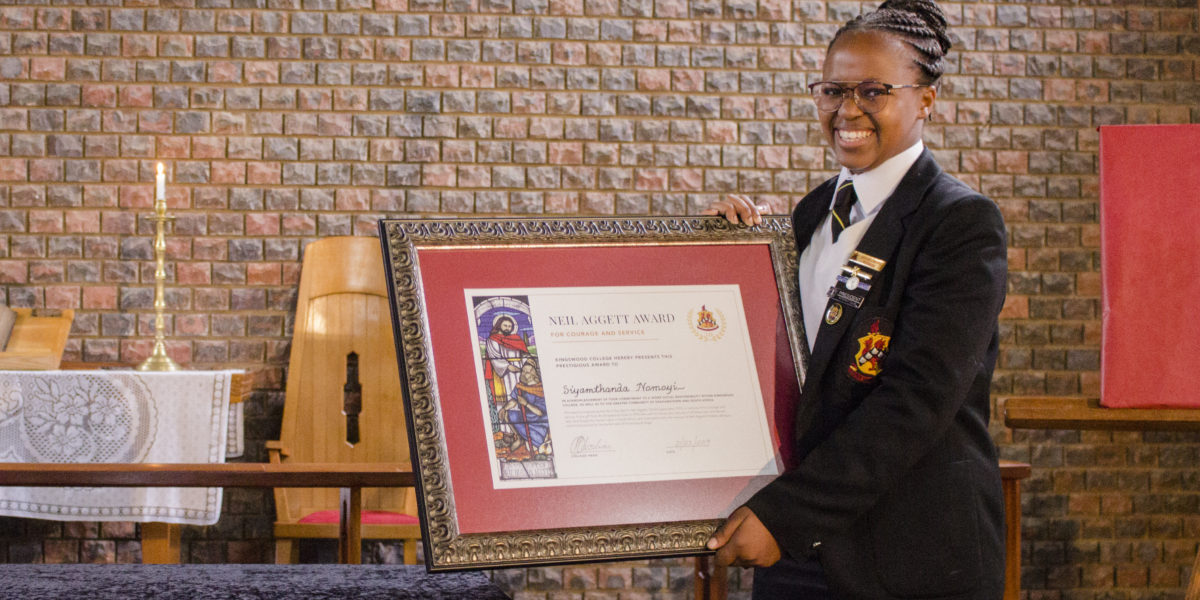 Siyamthanda Nomoyi, fondly known as Siya, is a true role model to her peers.  She is able to stand up for what is right without being swayed by peer pressure.  She has deep respect for her fellow man and demonstrates inner courage to fight for human dignity for those who are unable to stand up for themselves.  She takes initiative in planning and implementing projects and shows leadership when involved in community work.

Siya is a perfect example of service before self.  She demonstrates the care of the school in her role as Chapel Steward and Head of Interact, and she is fully engaged in her role as Head Girl.

Siya is a worthy recipient of this award.  In 2017 she started an initiative called #YouB4Me with three fellow pupils, with the sole purpose of reaching out to the community.  Later they decided to merge the initiative with #Sizimbokodo which solely focusses on women empowerment.  Siya co-founded  this women empowerment initiative which seeks to reach out to young girls in the community and she is hoping to soon make it an official Non-Profit Organisation.  As a part of the initiative, Siya organised a #Sizimbokodo event for young girls where she invited Makhanda (Grahamstown) pupils from all schools to join as they engaged in discussions based on the challenges that girls and women face.  Siya managed to secure the MEC for Arts and Culture as their guest speaker.

Siya has also being involved in the Mary Waters Mathematics Projects for the past four years.

During her school holidays she is involved in tutoring Maths and English to junior school pupils, from a school in King Williamstown (her home town) and she mentors a pupil from a primary school in the area.

She leads academic support for the children of the support staff on Friday afternoons.

She commits to visitations at McKaiser Old Age Home with the singing group and they often put together a parcel of groceries as needed.

Siya runs a clothing drive at Tshatshu as well as here at Kingswood College for the Rhini Community.

Siya is also a part of the President’s Award and the Youth Committee.

She is a member of the Interact Committee of Grahamstown (ICOG) representing Kingswood.

Through her leadership as Head Girl of Kingswood College in 2019, she has engaged maturely and intelligently and with wisdom beyond her years in discussions around College issues.  She has shown through her engagements with the school, an understanding of the key issues impacting on her community.  She has stood on the side of fairness and social justice in debates around the well-being of her fellow pupils.  Her opinions, while respectfully presented, carry great weight and value.  She is by nature modest and seeks no thanks for her efforts in a range of school and community activities.

Siya motivates and encourages people to get involved to spread awareness in her community.

She has, through her positive and ever-cheerful demeanour, won considerable respect and support from both the staff and pupils of Kingswood College.  She is generous with her time and energy and according to one of her nominators (a fellow pupil), she is ‘one of the most honest and authentic people at Kingswood College’.

In this way, she embodies the qualities found in the late Neil Aggett, making her a worthy recipient of this Memorial Award.

Spirituality Team In...
This morning our Spirituality Team Members’ Induction Service took place in our ...
Pre-Primary E-Learni...
As we start out on this journey we are very mindful of all the challenges that y...
Honours Award [Rugby...
Nigel joined Kingswood College in January 2019 as a Bridging Year student. He a...
Summer Term 2021 Fou...
The Summer Term of 2021 is over and while Covid remains, it was heart-warming to...