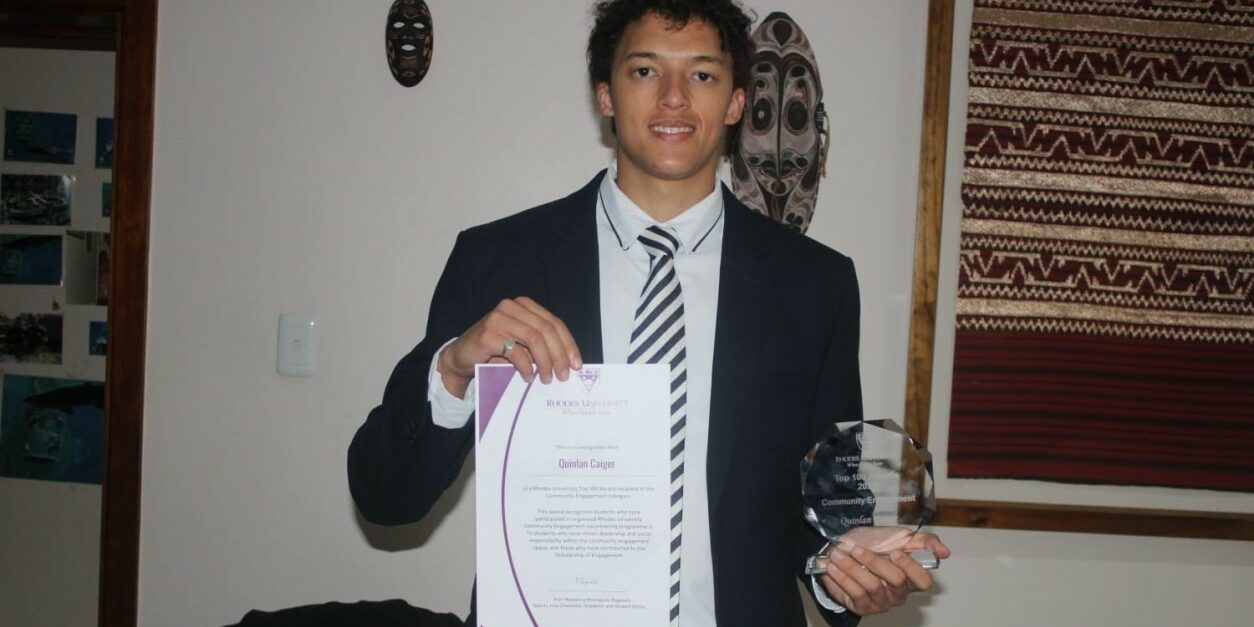 In a country plagued by fatherlessness, many male children are left in a vulnerable state without any male figure to teach them the essence of manhood. Dealing with this rejection proves too great a battle for many which often results in behavioural issues such as anger, smoking, drinking, bullyism, bunking classes or even dropping out of school completely. Some are catapulted into adulthood and become the ‘men of the house’ in order to provide for and protect their mothers and siblings which leads them to engage in criminal activities to achieve this.

In the midst of this, Quinlan Caiger – a third-year BSc student at Rhodes University in Makhanda and Kistefos AS Bursary recipient was inspired to establish the Men Mentoring Young Men (MMYM) in May 2021. Explaining his decision to start MMYM, Caiger said, “Although I initially had no intentions of participating in any community engagement initiative, in 2020, my mother and I discussed the possibility of establishing a programme like MMYM. She identified the Eluxolweni Child and Youth Care Centre as a great place to start. My mother has been giving back to the community for many years and her work for Hospice, Rotary and various other community projects became a huge inspiration for me to start this initiative.”

MMYM aims at providing mentorship to young boys from 8-18 years and has since been a safe space of brotherhood with weekly sessions of an hour to an hour and a half for 20 to 25 boys at the centre. Although there is a large age gap in our group, we generally find interactive activities that everyone can participate in and learn from. The sessions continually tackle an array of topics ranging from dating to exercise.

In recognition of the noticeable impact MMYM has had since its inception, Caiger was recently awarded the Community Engagement Award at the Rhodes University Top 100 Awards. Sharing his excitement about the recognition, Caiger said, “The award means a lot to me. It is a recognition of the continuous hard work that I and everyone involved in the programme have put in. It shows us that we have been seen and the centre and the boys have been seen too. It is a token of how far we have come in a relatively short period and the programme’s success.”

Highlighting the impact of fatherlessness on young boys Small Projects Foundation (SPF) social worker, Thandokazi Mtamzeli, said, “Such boys are extremely vulnerable and will try to find anyone they can trust and observe as their father figure. They end up following in their footsteps without realizing that some of these men engage in wrong or even illegal activities. The choices these young boys make when choosing role models or father figures can lead to them learning bad behaviour, being molested or even being detained in juvenile facilities. When these things happen, they find it hard to disclose to their mothers which is where initiatives like Quinlan’s help.”

Peering into the future, MMYM has an exciting set of sessions lined up before the end of the year and is looking into exploring collaborations to push the boundaries of the programme in 2023. “I have had many peers and friends feel inspired by what I have done and ask to participate in the programme. I would love them to not only help me but I would also like to help them start their own similar initiatives,” Caiger shared.

Click here to read the full story on LinkedIn

Women’s Month Series...
August is Women's Month and what better way to truly celebrate it than by touchi...
Kingswood Legends - ...
Kingswood legends and brothers, Derrick (OK 1943) and Maurice (OK 1946) Bradfiel...
Grade 12 Leavers Din...
Last night our Grade 12s gathered in the High Performance Centre for their Leave...
50 and 60 Year Reuni...
We welcomed back a wonderful group of OKs, celebrating their combined 50- and 60...