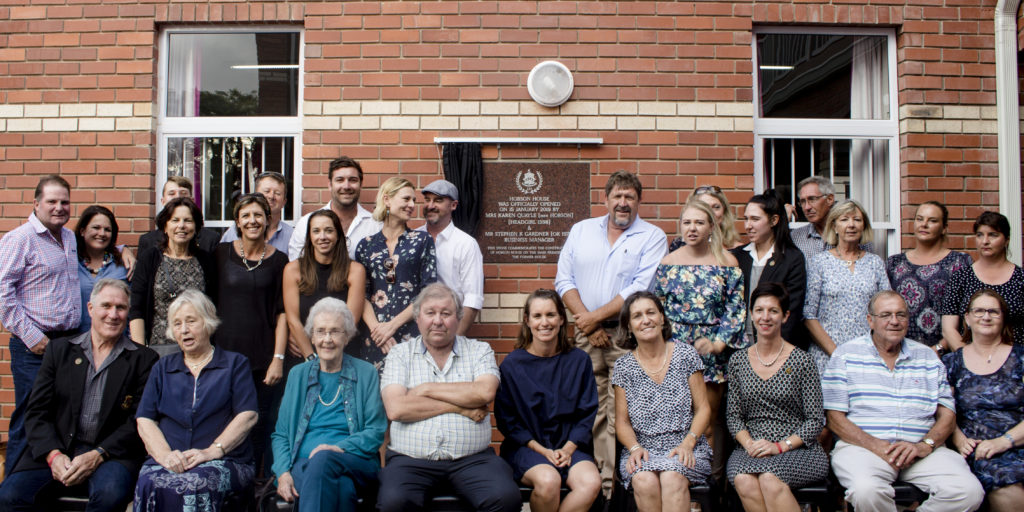 On Tuesday evening, Kingswood College reached another milestone in its history. We celebrated the official opening of Hobson House and paid tribute to the Hobson family whose history is so intrinsically linked with that of the history of our school.

We were privileged to share the opening, not only with our junior boarder girls, but also with a large number of Hobson family members who attended this opening of our new junior girls boarding facility.

Members of the Hobson clan have, since 1900, been an integral part of the Kingswood College family. The records show that to date, 48 Hobsons have collectively spent over 310 years at our College, and had Kingswood offered coeducation earlier in its history, this number would have been even higher; although looking at the gene pool in the 60s and 70s, the Hobsons were more successful at producing boys than girls (let’s blame the Karoo air for this phenomenon).

With the opening of this well-designed new facility, we are able to fit 55 pupil beds across five dormitories, each with their own designated bathroom. Hobson House also houses nine student assistant rooms, three flats and two common rooms, each with their own kitchen. The site of the house also boasts large grounds and two verandas, one on the ground floor and one on the first floor.

The use of natural light was important in the design process and energy efficient lighting is used throughout the building. The building makes use of alternative water heating systems and a freshwater tap runs through to each kitchen. The house is also connected to the school’s alternative generator and emergency water system and IT and Wi-Fi connectivity is available throughout.

The plaque was unveiled by Mrs Karen Quayle (nee Hobson and OK ‘98) and Mr Steve Gardner, the Kingswood College Business Manager. Mrs Karen Quayle was head girl in 1998. Karen made an outstanding all-round contribution to Kingswood during her time at the school, achieving an ‘A’ aggregate Matric pass and was awarded Academic Honours. She represented the KC 1st teams in tennis and hockey and gained colours awards for her contributions to these sporting codes. She was also selected to spend time at Hotchkiss in the USA as part of a pupil exchange programme.

As we celebrate the Hobson family; the Kingswood family and the very idea of a College where family values and belonging to a caring group are nurtured, Hobson House will be a place where “a family gathers”.

The old Brookshaw House, known as ‘Kuruman’, had strong links to the Wesley Girls School and belonged to one of the founding families of Kingswood College, Mr Richard Stocks. The house was then sold by the Stocks family to the Brookshaws who lived in the house until 1960. In 1960 Kingswood College purchased Brookshaw House for £5000 and the deed of sale was signed by Dr Hobson.

Kingswood utilised the house to accommodate housemasters of intermediate house and thereafter Mr Denis Butler, the Headmaster of the Junior School from 1969-1978, resided there.

The house then became a boarding house again and accommodated the overflow of girls from Jacques House. In 1979 the house became the Senior Primary Girls boarding House.

#Wellnesswednesday: ...
This week our #WellnessWednesday blog write-up comes from Dr Colleen Vassiliou o...
Dave Hodgson Sqaush ...
This past weekend the Kingswood boys and girls 1st teams competed in the annual ...
Drama Honours - Cath...
Kayleigh Mildenhall has achieved her Academic Honours. Click here to read the ci...
Looking ahead: Pupil...
The excitement and energy was palpable last Sunday as our Grade 11s set off for...