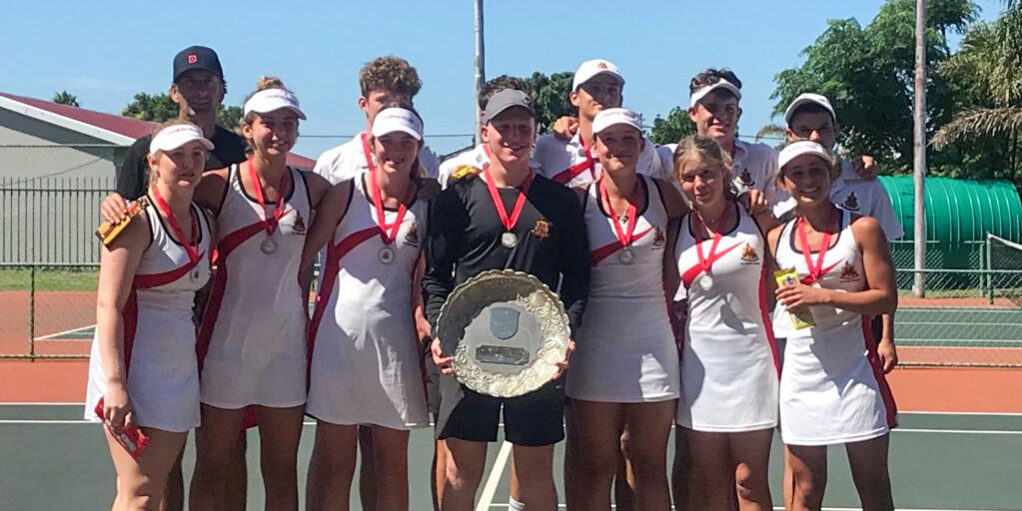 Kingswood celebrates their 1st Boys and 1st Girls Tennis players for an undefeated run, and a well-deserved WIN!

The Selborne/Clarendon Singles and Mixed Doubles Tennis Tournament took place in East London from Friday, 4th March to Saturday, 5th March. It is a gruelling competition where the top 6 1st team boys and girls have to play singles and mixed doubles against their opponents – this totals 18 matches per round!

Kingswood faced Grey High/Collegiate in the 1st Round, and dealt with their opponents without dropping a match taking a 12 – 1 victory on points. A truly remarkable start to the tournament with outstanding performances from all.

Our 2nd Round opponents were Queens/GHS. Again our 1st Boys and Girls dominated by dropping only one match, taking the victory 10 points to 2. It was clear that our boys and girls were there to compete.

In the 3rd Round Kingswood faced Merrifield. Once again our players took full control by winning all of their matches and taking a 12 – 0 win. An absolutely brilliant 1st day of tennis taking Kingswood to the top of their pool, and into the first playoff against the runner-up of the other pool.

Our players fought hard, and walked away with the honours having taken the round by 21 points to 16 – a truly challenging experience that stood them in good stead for the ultimate final round.

After a great win, Kingswood faced Pearson in the finals of the tournament. They were playing for top spot, and the round only continues until a winner can be declared. It was a tense affair.

Our boys managed to win 2 of their singles matches, but they dropped 4 matches to Pearson. Our Girls took complete control of their singles by winning all 6 matches. By the time 2 of the 3 mixed doubles fixtures were completed – each school taking one match – the outcome was already clear as the points gave our Kingswood boys and girls a 20 points to 12 advantage, leading to the end being called and KIngswood proclaimed the victors!

Awards at the Tournament Prize Giving

The following players also received recognition during the awards ceremony:

In the boys section:

Matt Gadd was named the best player in 5th position out of all teams in the tournament.

In the girls section:

Jenna Gadd was named as the best player in 6th position out of all teams in the tournament.

Chloe Erasmus was named the best player in 5th position out of all teams in the tournament.

Isabelle Oertel was named the best player in 3rd position out of all teams int he tournament.

Madison Edwards was named the best No1 player out of all teams in the tournament.