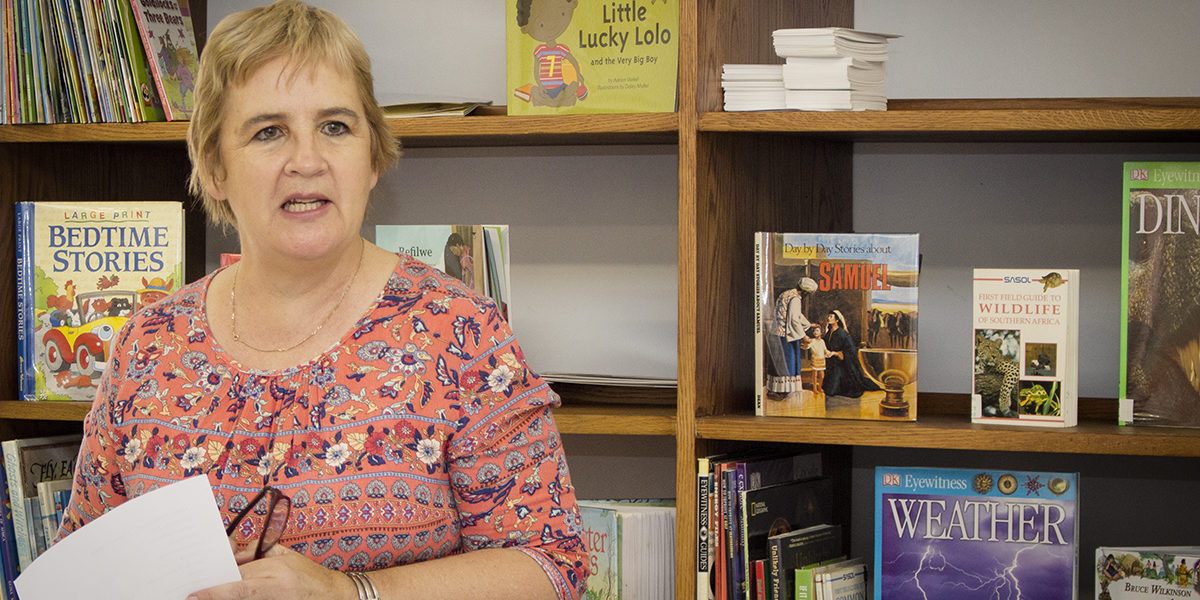 To give the gift of reading is to discover exciting and endless possibilities.

To give the gift of reading is to give flight to the imagination.

To give the gift of reading is to enrich someone’s life forever.

The Intsomi Reading Project was launched at Kingswood College this week, as part of the school’s community engagement programme.

The event took place in the Housekeeping Tea Room, where a lending library has been set up for 28 support staff members who have signed up for the project. The books currently available are a mixture of fiction and non-fiction, and are targeted at children aged 3 -16 years of age.

At the launch, Mr Cathy Gush, co-ordinator of the project, pointed out that this is just the beginning, and that the project is expected to grow in membership and in scope. She encouraged parents to spend time reading with their children at home, and said they were now part of a bigger Intsomi “family”, as the project is also operational at Rhodes University.

The broader project was started at Rhodes in 2014 with their support staff as part of a process that wants to see more local young people being able to access the University to further their studies. It aims to capacitate parents in supporting their children’s learning and in strengthening their home literacy practices through a book lending system and a series of workshops.

Intsomi is the isiXhosa word for ‘traditional story’ and the project was named this by the participants because they want to revive the tradition of families spending time together around stories.

Having been involved with the project at Rhodes, Mrs Cathy Gush was able to extend the concept to the Kingswood campus as part of the College’s commitment to Community Engagement. It is also a natural extension of the already-established programme of Kingswood Interact pupils supporting staff children with a homework club in   a team effort that involves staff members connected to the Junior and Senior School libraries, as well as the Contract Manager. The project has now finally come to fruition after months of preparation.

Further stages will involve creating opportunities for  staff children to come and choose books in the library and to access reference books for research purposes, as well as stocking the library with reading material for the parents themselves.

“Parents are important contributors to their children’s literacy development, and the Intsomi Project aims to empower and build capacity for parents to play this role. It supports staff on campus but also extends it to their homes and families, and it is our hope that these parents will become literacy activists in their own communities. The launch of the Intsomi Project on Tuesday represented a very special moment”, Mrs Cathy Gush stated.

Kingswood College Head, Dr Colleen Vassiliou, attended the launch and handed out to each of the participants   specially designed shweshwe book bags in the red and black colours of Kingswood. She reiterated to the Intsomi participants that the greatest gift one can give our children is our time and one of the greatest ways to spend our time is to spend it reading, either with them, or to them.

There was great excitement amongst the support staff who were, for the first time, able  to choose books from the Intsomi lending library to take home and to share with their children.

Dr Vassiliou emphasized the importance of a project like this and stated that “Kingswood supports the Intsomi Reading Project and sees it as an extension of our Educating for Life vision. This vision should not be limited to our pupils alone, but also afforded to the greater Kingswood College family.”

Funding for the project has been provided by the Nal’ithuba Trust, but anyone interested in donating books or providing any other form of assistance, can contact Cathy on c.gush@kingswoodcollege.com