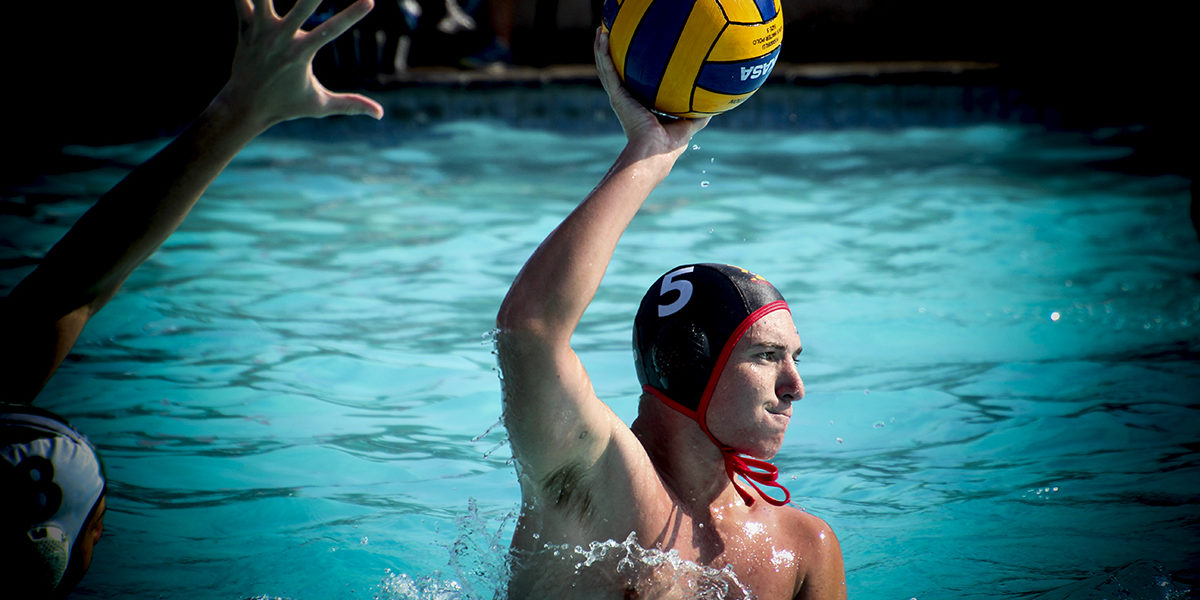 The first team water polo girls traveled to Johannesburg for the St Stithians Invitational Water Polo Tournament. Having lost most of our starting seven, it was a tournament where we aimed to rebuild our team and learn to play together. The girls had an excellent tournament and improved game on game. We were in a tough pool, and unfortunately lost all of our pool games. Most of these games were closely fought, and the girls played well in defense, supporting each other.

We needed to win our match against Rand Park High School on Saturday morning to avoid the bottom four positions. The girls played disciplined, structured waterpolo and operated as a team. Everyone contributed to our success and we won the game 9-3. We then met DSG in the next round. This is always a big game for Kingswood, and DSG were the favourites going into the game. The 1st team did Kingswood proud and we won 7-5.

We played our final match on Sunday morning against St Mary’s Waverley. They had beaten us 9-5 in the pool games. The girls played well from the start and were in the lead going into the 4th quarter. St Mary’s fought back, and levelled the score, forcing the game to a penalty shoot out. We won this contest 2-1. The girls finished a very respectable 13th in a tough tournament. They should be commended on their attitude and spirit both in and out of the pool.

Our ‘stayers’ (no matrics) boys water polo team took part in the 26th Saints Water Polo Invitational tournament, held annually by St Stithians College in Johannesburg, from 24 – 27 October.  Being one, of only two co-educational schools participating in the boys section our gents did well to finish 12th overall.

Their first pool game had the boys facing-off against Grey High School from Bloemfontein. Kingswood held their own well beginning the tournament with a 6-5 win.

The second game of the day had the boys squaring off against a very strong Rondebosch Boys team.  Whilst they managed to keep the first chukka to a 2-2 draw Rondebosch pressed hard in the remaining three chukkas resulting in an 8-18 loss.

Friday the 25th saw the boys start the day with a game against Pretoria Boys.  The boys took control of the game during the second chukka and won 9-7.

Our final pool game saw the boys face-off against the hosts, St Stithians College.  Saints came out with all guns blazing scoring the 8 goals in the first chukka.  The boys showed true grit to hold off the onslaught and come back during the remaining 3 chukkas.  Final score: 5-15 to Saints meant that we finished 3rd out of 5 in our pool.

Saturday the 26th started off with an early game against Bishops for a chance to play in the quarter finals.  The much stronger Bishops side took control of the game from the start winning 5-17 and excluding the boys from the top 8 / quarter finals.

The boys went on to play against KES in the afternoon. A much stronger and more physical side, KES dominated our boys and won the game 4-13.

Our last game against Hilton College was played on Sunday the 27th.  Hilton outclassed our boys and won the game 6-13 ranking the boys twelfth overall.

Over the course of the tournament the boys certainly grew as water polo players with many of the officials and other management noticing the marked improvement over such a short period of time.

2021 OK Club Tie Pre...
Our Matric class of 2021 were given their Old Kingswoodian Ties and welcomed int...
Kingswood celebrates...
Did you know that before Kingswood moved to its current site on Burton Street i...
"Today we celebrate,...
Salimisa Bikani, Matric pupil Matric pupil, Salimisa Bikani made this speec...
26 Years of Kingswoo...
Today we celebrate Mrs Elmarie Retief, the College Head’s PA, as part of our “Ge...