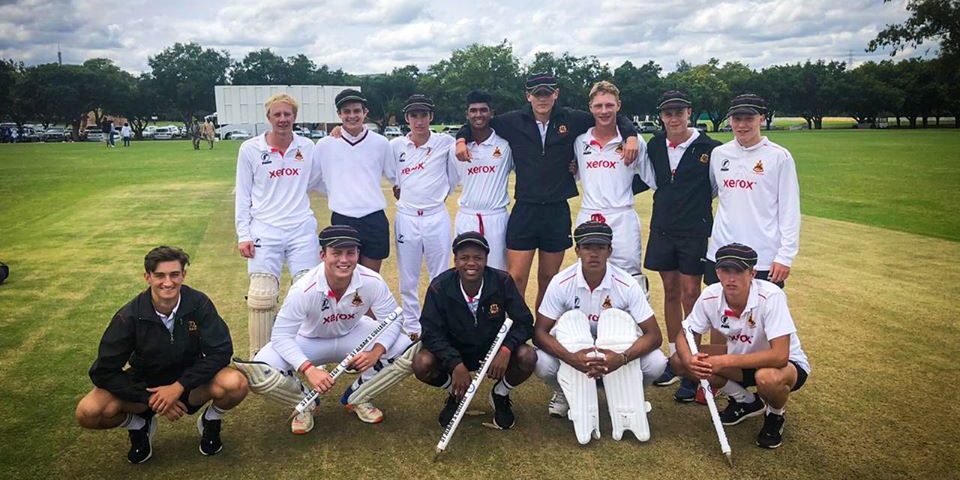 The team played three matches winning two and drawing one. Unfortunately the last match against St Stithians College was called off due to a wet outfield.

On the first day, Kingswood took on St Davids from Johannesburg in a declaration match. Kingswood won the toss and elected to bowl first on a surface that would offer assistance to the seamers. Caleb Daniels (3/20) and Matthew Stretton (3/16) combined well as Kingswood bowled St Davids out for 104.

In reply Kingswood showed very good discipline as they chased down the total required for victory. Ethan Maddocks played positively in his innings of 52 runs and together with Darius Govender (66 not out) put on 72 runs for the 2nd wicket. Kingswood batted past the St Davids total and reached 177/5 before declaring and asking St Davids to bat again. Kingswood won the match by 7 wickets.

The second day saw Kingswood take on the hosts St Albans College. This was also a declaration match.

St Albans won the toss and asked Kingswood to bat first. Kingswood started slowly and were soon in trouble at 50/4. Matthew Pritchard was outstanding (77 not out) as he held the innings together for Kingswood. He was well supported by Callum Mcgregor in a partnership of 38 runs for the 5th wicket. Matthew Stretton (32) combined well with Pritchard in a partnership of 54 runs for the 6th wicket. Once Stretton was dismissed Luke Kelly (26 not out) joined Pritchard and put on 44 runs for the 8th wicket. This enabled Kingswood to get to 203/7 after 60 overs. Time was lost due to lighting strikes in the area which meant that when play resumed Kingswood had to declare their innings. This left St Alban’s needing 204 runs off 36 overs for victory.

Unfortunately both teams were forced to leave the field again only 8 overs into the St Albans innings due to bad weather.
The match was drawn.

Our third fixture was against St Benedict’s College in a 50 over match. Kingswood won the toss and elected to bowl first. Caleb Daniels (4/29) was superb as he ripped through the St Benedict’s batting line up. He was very well supported by Usivile Zweni (2/13) Luke Kelly(2/19) and Mike Fourie (2/15). Kingswood dismissed St Benedict’s for 84 runs.

In reply, Kingswood were clinical in their run chase as they reached the required target for the loss of 3 wickets. Ethan Maddocks (25) and Nathan Wolff (22 not out) led the way with the bat.

The final fixture against St Stithians College was unfortunately called off due to a very wet outfield.

Renaming ceremony in...
“…Renaming Burton Street after Rev Dr Simon Gqubule is not about trying to wipe ...
Academic Honours Cit...
Presented at the Academic Awards Assembly held on the 10th of October 2019 M...
Getting to know the ...
Campus is slowly starting to come alive again as we start to gear up for the new...
A proud day for the ...
40 years ago on Sports Day, Justin (OK 1980) and Michael Wilmot (OK 1983) were a...