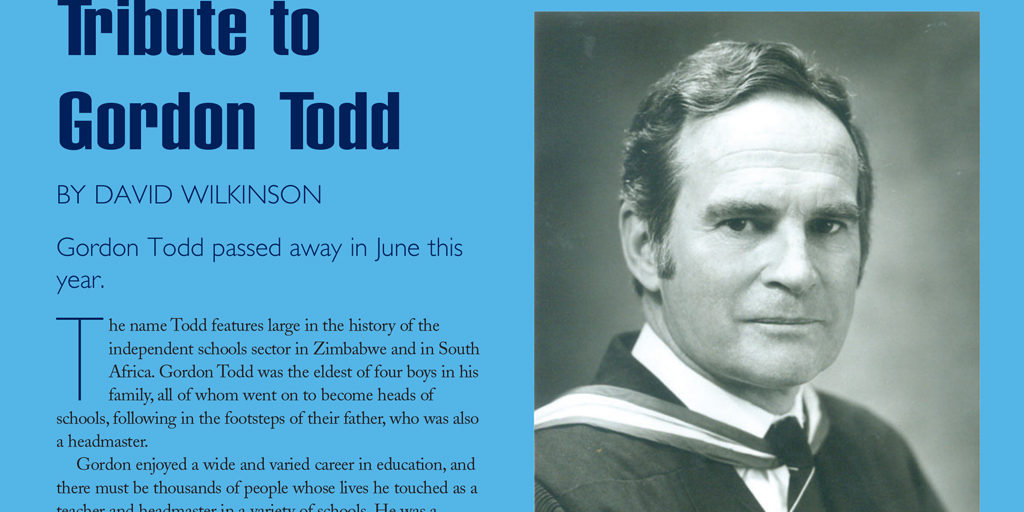 Gordon Stewart Todd was Headmaster at Kingswood from 1980 – August 1986. In the words of Rev. Kirkby, “The academic and cultural side of Kingswood was dearly flourishing under Gordon Todd’s hand”.

Gordon Todd left an indelible mark on Kingswood’s history, thanks must go to Mr. David Wilkinson for this wonderful tribute to his memory.

This tribute to Gordon Todd was published in the Independent Education Spring 2020 Magazine Vol 23, No 2, and was written by Mr. David Wilkinson, Kingswood Headmaster from 1993 – 1997.

Gordon Todd passed away in June this year. The name Todd features large in the history of the independent schools sector in Zimbabwe and in South Africa. Gordon Todd was the eldest of four boys in his family, all of whom went on to become heads of schools, following in the footsteps of their father, who was also a headmaster.

Gordon enjoyed a wide and varied career in education, and there must be thousands of people whose lives he touched as a teacher and headmaster in a variety of schools. He was a housemaster at Umtali Boys’ High School, from where he went on to be deputy head of Milton School in Bulawayo. He then was appointed head of Allan Wilson School in Harare.

From there, Gordon was recruited to be headmaster of Kingswood College, in Grahamstown in the Eastern Cape. At the time, the school was undergoing a transformation from being a boys’ school to a co-educational one. This was not an easy exercise, due to the strong pull of 80 years of tradition and the difficulty of changing mindsets about allowing girls to have equal opportunities to those of boys.

As a head, Gordon revealed strong qualities – he was a deeply principled person who would stand firm for what he believed was right. At Kingswood, he conducted himself with impeccable professionalism, and he played a significant role in building up music at the school, which is now an outstanding feature of the school.

After leaving Kingswood in 1986, Gordon was appointed to the teaching staff of St John’s College in Johannesburg. After several years there, he was asked to establish the high school section of Bishop Bavin School, where he continued until retirement.

On retirement, Gordon moved back to the Eastern Cape to his home in Port Alfred, and was for 12 years the regional director for ISASA schools in the south-east region. A great many ISASA schools in this area were new schools that relied on the regional director to champion their bid to receive their due subsidies, and which also relied on him for guidance in establishing best practice, as they attempted to meet the needs and expectations of the families they served. Gordon did a wonderful job in establishing the foundations for his successor, Jan Immelman, to build upon, and their combined efforts have led to ISASA having a meaningful and valuable presence in this seriously under-resourced province.

Gordon was married to Biffy, herself a very successful teacher in a variety of schools, who was his constant companion and supporter throughout his years of being a housemaster, headmaster and regional director. Gordon was a quiet and unassuming professional, whose contribution to independent schools in South Africa was of considerable value. He will be remembered for his winning personality and for being a strong and caring individual, who served his school communities with an unstinting measure of devotion. He and Biffy enjoyed living in Port Alfred and he was active in the golf club. He also served as president of the Port Alfred Probus Club. Gordon was the perfect gentleman, genuine, sincere and very principled. He had a lovely sense of humour and he and Biffy always enjoyed the company of friends and family.

Thanks go to David Wynne, Jan Immelman, Neil Jardine and Roy Gordon for their contributions to this tribute.

This tribute to Gordon Todd was published in the Independent Education Spring 2020 Magazine Vol 23, No 2.

Remembrance Day Para...
Sunday, 14 November 2021 was the annual district Remembrance Day Parade. Represe...
Women’s Month Series...
KC Women's Month Series #10: e interviewed Dr Lizle Oosthuizen for our penultima...
Welcome to 2022 - Mr...
With the welcome rains and our return to the College campus, we look forward to ...
City Lords Astroturf...
Most people don’t know, but to retain its integrity, a hockey asto needs to be r...