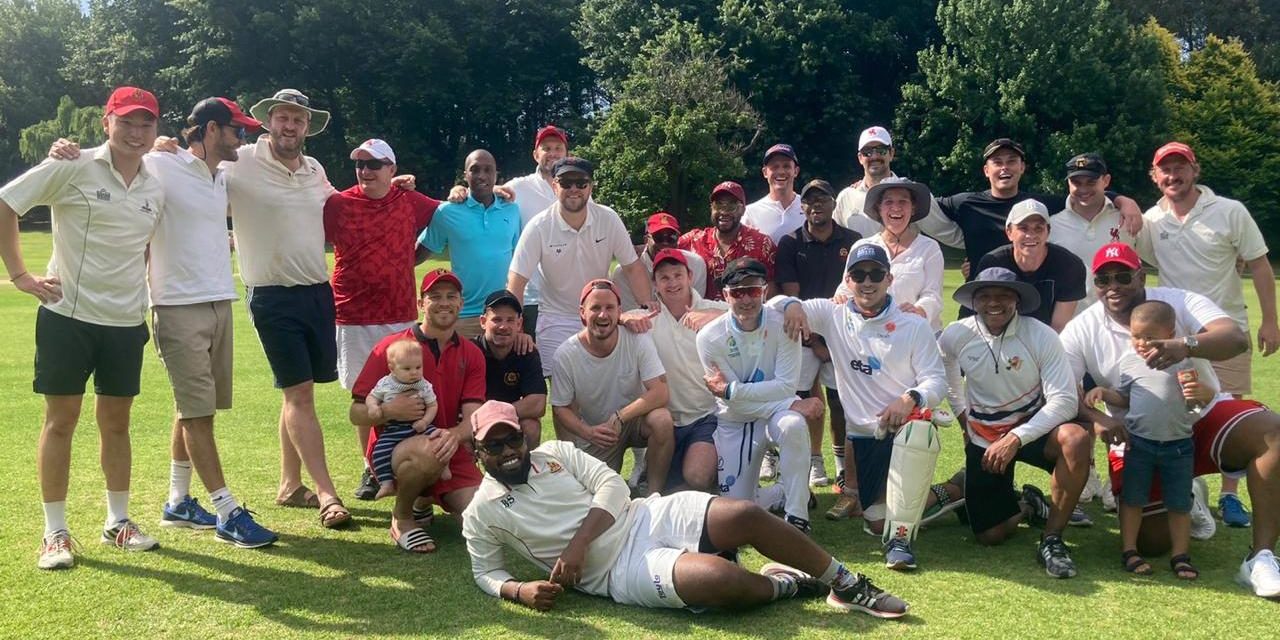 Sunday, November 15 was the perfect day for the OKs of Gauteng to meet up at Country Club Johannesburg for a nostalgic game of inter-house cricket – the weather and atmosphere were unmatched. The days leading up to the game saw teams feverishly assigning players, deciding on team kit and some potential player steals. Team members ranged from 22 years old to 50 – something from all 4 houses. On the day, the boys and one girl warmed up together. Excitement mounted as the batting line up was decided and cricket balls were given a “haircut” prior to play.

Jag-Wood chose to field after winning the toss. Superb wicket keeping by ex EP Schools representative Bheki Ngulube , a couple of great catches and spectacular boundaries, including a maximum into the oaks that provided shade for the spectators, kept the crowd enthralled. Despite their age, the fielders dived and leaped like schoolboys to keep the School House runs at bay. They retired for lunch and drinks in the shade on 174 runs all out. Picnic boxes were handed out and the players tucked into boerewors rolls to re-energise for the second innings.

The OK families with plenty of small children arrived throughout the morning and picnicked on the perimeter of the Country Club oval while enjoying the game.

When Jag-Wood went into bat, the School House fielders tried a few intimidating tactics but the Jag-Wood batters stood firm. School House, through clever rotation of their bowlers, managed to keep the Jag-Wood run rate well under control. The afternoon energy was decidedly lower than the morning session – thanks no doubt to lunch, refreshments and the blazing sun. Jag-Wood scored 150 for 9, coming up just 24 runs short in their 25 overs, with Jordan Williams (30 Not out – Retired) waiting patiently to get back out to bat, but the Curtis brothers, Shaun and Greg, had other ideas having too much fun out in the middle, keeping him under the Oaks.

The best bowler of the day was Shaun Curtis (Jag-Wood) with figures of 5/22 and the best batsman was awarded to Darren Ah Yui (School House) who scored an impressive 55. Both Darren and Mark “Charlie” Charlton had returned to the crease after being retired at 30, Charlie getting 40 before being Shaun’s 5th and final victim. John Bandey captured 2/17 with his ‘leggies” for the winning team. Notable performances went to both evergreen veteran Alistair Scott and Jordan Williams who each collected a few wickets and runs for the Jag-wood side.

Melanie Keartland (the only lady player) received best fielder award in recognition of her tireless efforts.

Dave Papenfus and Bruce Bean (both School House boys…..hmmm) acted as umpires and are to be lauded for a full day in the sun. Generations of OKs popped in say to hi and enjoy the match. The raffle prize of 2 tickets for a Supersport Park match (once spectating opens up) was won by a delighted Mark Spillhaus

Thanks to the Morrison, Hall, Bandey and Kahn families for sponsoring our 2020 Gauteng OK Club event which rejuvenated the club in preparation for 2021. Events planned for the New Year include a gala dinner, the annual golf day and another cricket revenge match in the Spring. The School House men had better prepare themselves for a bowling onslaught from Meyrick Pringle and Brett Schultz in this rematch! The committee is also hoping to get the Thirsty Thursdays going again, following a year of lockdown.