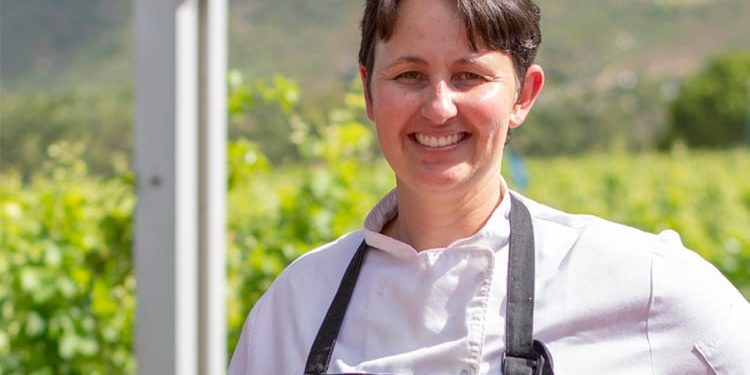 When looking for a good meal in Cape Town you need look no further than Steensberg’s Bistro 1862 or Tryn. Here you will be treated to a sumptuous meal prepared by Executive Chef Kerry Kiplin (nee Warren OK 2000).

There is nothing better than hearing about the success of our Old Kingswoodians – especially in a time when good news is sometimes hard to come by. Last week we were told about Kerry’s successes in Cape Town and we just had to share the story. She’s a vibrant and prolific contributor to the food industry in South Africa and someone to follow if food is your passion.

Kerry grew up on a farm in the Bathurst area, and her love of food was there as a little girl.

“I love to bake, and at month end my father would pay all the staff wages. I would bake cakes and sell them to the workers. This little business continued when I went to boarding school and on the weekends I would come home and bake to sell to my classmates. By matric at Kingswood there wasn’t a doubt in my mind that I wanted to go to chefs School and learn to cook!”

The rest is history – Kerry studied at Silwood Kitchen for three years and during her second year she was placed at La Colombe Restaurant where she was fortunate to meet Franck Dangereux. He offered her a job as part of her third-year placement and he became her mentor for the next 12 years. Kerry was appointed as his Sous Chef and later Head Chef when he started his own business at The Food Barn.

However, her wish to spread her wings and run her own restaurant came true when she was appointed to the position of Executive Chef at Tryn and Bistro 1862 on Steenberg Estate.

So when visiting these establishments look out for Kerry – she would love to catch up with fellow Old Kingswoodians.

Credit to wine.co.za for the basis of this article.

Welcome to 2022 - Mr...
With the welcome rains and our return to the College campus, we look forward to ...
Jack Denton (OK 2013...
Born in Zimbabwe, raised in Jagger House at Kingswood, @Jack Denton (OK 2013) ha...
Steve Lewy's (OK) An...
A very different term to what we have ever encountered before, but the possibili...
Celebrating Internat...
Today, Wednesday, 12 May we celebrate International Nurses Day for 2021. Sr Jun...