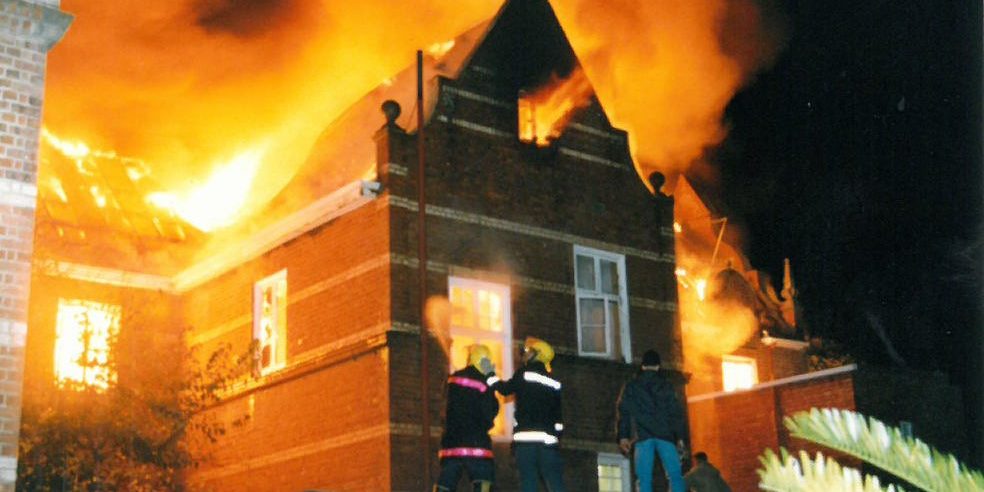 On a quiet winter’s night and in the darkness, a lone bell rang out. Getting louder and louder with each ring, the bell signalled that all was not well. The first subtle smell of smoke became stronger and more powerful with each whiff, as it drifted off across the valley and over our town. The flames, once small and simmering, become more angry with each passing minute. School House was, burning.

It is hard to fathom how a majestic building such as this, could ever have been engulfed in raging flames. Just after 9pm on the 4th of June 1996, the bell began to ring and the urgent evacuation of the building began. No one could have prepared those present for the night that lay ahead.

By 2am the next morning, the fire had been contained and School House lay in ruins, smouldering away. One can hardly imagine the horror of that night and the helplessness that so many felt in those hours. The next day, the true extent of the damage was realised. A long road lay ahead of Kingswood.

The headline in the Eastern Province Herald on June 6th, 1996 summed it up perfectly: “History goes up in smoke.”

Although so much had been lost in the fire, the generosity and kindness of Old Kingswoodians, the Makhanda (Grahams town) community and from people further afield was overwhelming. In true Kingswood spirit, the school, its staff and pupils picked up the pieces, literally and figuratively, and began to carve out a “new normal”.

That morning some of the first people to arrive was Chairman of Council, Mr Buster Brotherton and his Vice-Chairman, Prof Peter Booysen. Meetings with Management took place and a decision was unanimously made that School House should be restored as far as possible to its former glory. Kingswood had a very big project on its hands. The school would have to rally, to rebuild, and to revive this historical building.

Just shy of two years later, on Foundation Day, 14 March 1998, School House was officially reopened. There was a large crowd of pupils, staff, parents and Old Kingswoodians and friends of the school in attendance in what was called ‘a grandiose affair’.

The building was referred to as “the best boarding house in Africa” by the East Cape News.

***Thank you to Mr David Stevens for sharing an in-depth account of the School House fire and the rebuilding thereof. His document was invaluable in the writing of this piece.