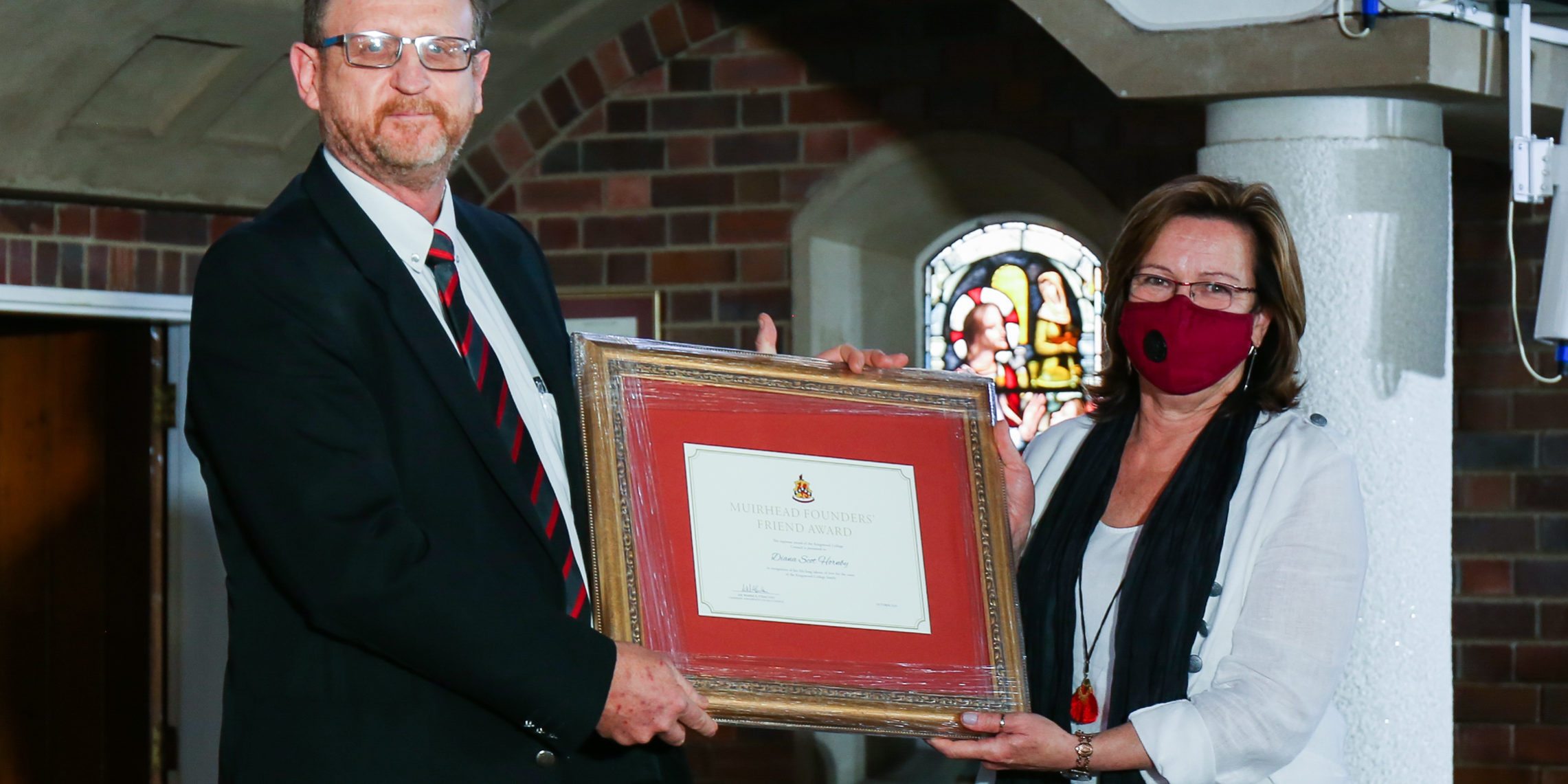 In life, every ending is just a new beginning

At the Senior School Prizegiving for 2020, the prestigious Muirhead Founders Friend Award was once again bestowed on an incredibly special individual – Mrs Diana Hornby. Chairman of the Kingswood Council, Mr. Warrick Strachan proudly presented the award. His citation can be found below:

It was first presented in 2004, after it became apparent to the Kingswood College Council that there was a gap in the school’s award system for recognising service or benefit to the college that could be regarded as “far beyond the call of duty”.

The College Council decided to institute a new award, to be recognised as the supreme honour that council can bestow, and named it after Mr William Muirhead, one of the original founders of the College. Because of the importance of the award, Council decided that recipients should be announced at the annual Prizegiving Ceremony of the Senior School.

After school Di studied ,completing B Ed and B Ed (Honours) degrees followed by a Master’s degree in Social Science, all at Rhodes University. And in January 2011 to the present Di is working at Rhodes University and is the Director Community Engagement.

Di is married to Pat and they have 2 children Scott and Jessica, both of whom came to Kingswood. They also have 4 grandchildren whom with which she like to spend as much time as possible.

One cannot omit to acknowledge how deep Kingswood runs through Di’s veins when one notes the many Brotherton’s who have passed through Kingswood, to name a few –  her father Buster, a previous recipient of this prestigious award, her late Uncle, David Brotherton, brother Edgar, Sue (her sister who was student assistant at KC and later awarded Honorary OK status and of course takes care of the gardens of our beautiful campus.).

In addition 7 of the younger generation have also been through the gates of Kingswood – Scott and Jess (children) as well as Richard, Donne’, Lexi, Niki Andrew and Neil (nieces and nephews). In 2020 the 4th generation of Brotherton’s started their career at Kingswood with granddaughter Scarlett being enrolled at Pre Primary.

When the then Chairman of Council, Evan Dold invited Di to become a Council Elected Member in March 2002 she accepted the challenge  with gusto, enthusiasm & immersed herself in the challenge.

To illustrate this,  soon thereafter Di chaired the first meeting of the Integrated Community Development Task Team to develop a way forward for a Kingswood community-based  outreach programme.

This idea came from the Reverend Tim Rist,  the then Chaplain  who had been involved with the Lebone House initiative in Bloemfontein. Di soon recognised that the Kingswood approach to community development should be broader and hence the name Integrated Community Development Programme (ICDP) was adopted. In the same year Council confirmed Di’s nomination as Chair of the Council subcommittee for the LeboneProject and the ICDP.  Added to this Council requested Di to participate in the Council Sub Committees of Fundraising and Marketing.   When in 2005 Di reported to Council that the programme had been operationalised through the Integrated Community Development Trust, the  Lebone Sub-Committee be dissolved as it had achieved its goals.

Over the  past 15 years Lebone  House has played a very important role in the lives of  young children of children Makanda.

After her initial term of 3 years,  Di was re-elected  Council to serve her alma mater. Over the next three years, one could see a subtle shift in Di’s contribution to Kingswood. Whilst still a member of the Marketing, ICDP sub-committees and Nal’ithuba Trust one could see over time Di’s “big picture” view of Kingswood through her involvement in the Development Sub Committee. At the outset of her new term as a Councillor in her inimitable considered and inclusive approach and yet quite manner she was talking about leadership in general, a Leadership Centre and an initiative including the potential pivotal roles Rhodes University and Kingswood could play. This period also saw the presentation of the first comprehensive Development Forward Plan and her steady hand in managing the proposal to Council on the modus operandi for the future management of the development office.

In March 2007 Di became a member of the College Executive Committee and Chair of the Development Sub Committee and she continued to be a trustee on the ICDP and Nal’ithuba Trusts. It was during this time that Di began raising the subtle yet significant difference and importance between Development and Fundraising.

On 26 March 2011 Di was unanimously elected as Chairman of Council and in accepting this role she indicated her leadership style of inclusiveness and collaboration with Councillors, College Management and Staff.

2011 was the inaugural award of the Neil Aggett Award which was conceived by the “Class of 1970” and it was Di who drove the preparation of the criteria for the award for “courage and service”.

Probably one of the more important documents tabled at Council in 2011 was a close-out report prepared by Dr Barbara Matthews in regard to Strategic Planning.  Just looking at Di’s leadership style she must have read this report with great care as it was her integrated strategic approach to the overall College business that became a hallmark of her tenure as Chairman of Council.

It was during this time that Di achieved some amazing milestones in the history of the College not the least being a number of firsts.

But probably the most important contribution Di has made during her ten-year term as Chairman of the Kingswood College Council was to lead Council, Management, and Staff in creating and approving probably the only comprehensive, yet practical integrated Strategy, Governance, Risk, Compliance and Performance document applicable to a school in South Africa. This document is the foundation of how to run a school efficiently and effectively.

Di’s term as Chairman of Council came to an end in March 2020, but notwithstanding this Di has agreed to stay on Council and lead the Council Sub Committee on Estates and Buildings following in the footsteps of a giant, her father Buster.

If we may repeat Dr. Barbara Mathew’s words on Di’s award of Honorary Life President of the Old Kingswoodian Club she wrote “I have no doubt Diana Brotherton Hornby’s influence and legacy will still echo through the halls of the school … remembering this as a time of courage and vision, and remember the woman who was the calm, steady presence guiding the ship.”

Junior School E-Lear...
With classes set to resume on Wednesday 29 April, our Kingswood Junior School He...
Kingswood Matric Cla...
The covid-19 pandemic has been a challenging time for the country and indeed the...
#Wellnesswednesday: ...
This week's #WellnessWednesday message comes from our learning support specialis...
Senior Chapel Stewar...
Our Senior Chapel Stewards had a retreat this weekend. Coming in on a high ...