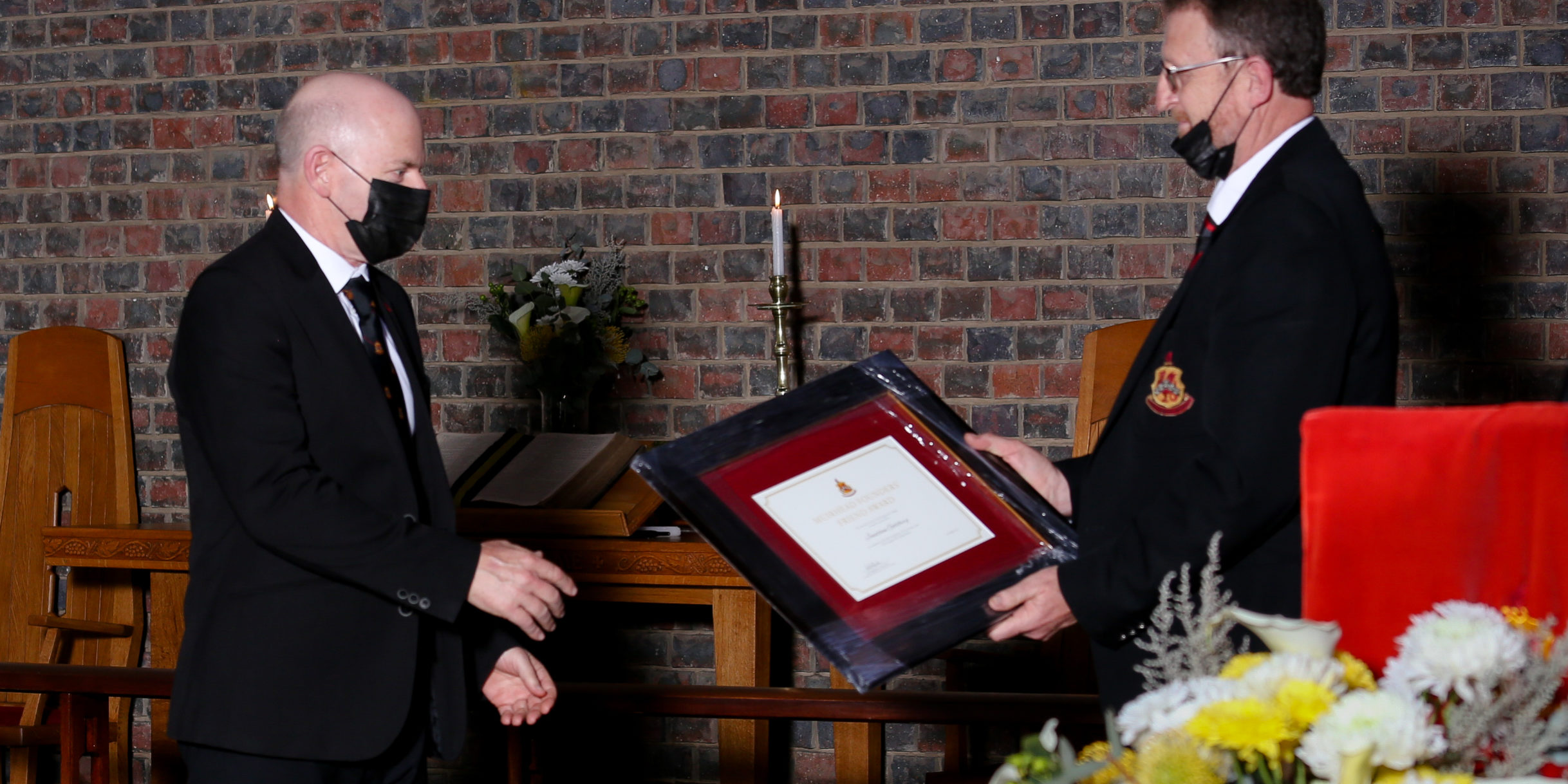 At the Senior School Prizegiving for 2021, the prestigious Muirhead Founders Friend Award was bestowed upon a most worthy individual – Mr Jonathan Goldberg., Mr. Warrick Strachan proudly presented the award. His citation can be found below:

It was first presented in 2004, after it became apparent to the Kingswood College Council that there was a gap in the school’s award system for recognising service or benefit to the college that could be regarded as “far beyond the call of duty”.

The College Council decided to institute a new award, to be recognised as the supreme honour that council can bestow, and named it after Mr William Muirhead, one of the original founders of the College. Because of the importance of the award, Council decided that recipients should be announced at the annual Prizegiving Ceremony of the Senior School.

Johnny, as he is known to many of his friends and colleagues, was the second generation to arrive at Kingswood in 1973 and matriculated in 1980. At school sport Johnny representing KC 1st Rugby team and was awarded Colours.

After graduation from Stellenbosch University in 1989 armed with a comprehensive legal and business education this was the launchpad for Johnny into the big wide world of business and entrepreneurship. In this regard Johnny’s Curriculum Vitae is impressive reading with the executive summary stating;

“Over the past 20 years, he has been at the forefront of the changing labour law landscape, leading negotiations at plant, industry and NEDLAC levels. He assists clients to navigate the dynamic regulatory environment. Jonathan holds several key roles including being nominated as a business representative, as employment conditions commissioner, chief operating officer of the Confederation of Associations in the Private Employment Sector (CAPES), member of the Employment Services Board, and as a BUSA representative at NEDLAC focusing on labour law amendments, including a- typical employment. Jonathan continues to be actively involved in various industries, leading and advising on negotiations in numerous sectors of the economy. He is the chairperson of two large South African organisations, one of which is listed on the Johannesburg Stock Exchange. As a sought- after advisor/speaker and lecturer, Jonathan has conducted thousands of strategic interventions and presentations, sharing his expertise and insight.”

Whilst Johnny was about to launch his business career the College identified his potential as a valued member of Council, and in 2003 the then Chairman of Council, Evan Dold invited Johnny to make himself available and he was elected as an Old Kingswoodian Club Representative on Council and continues to be a Councillor today.

No sooner had Johnny joined Council that he made his mark by being the catalyst and founding member of the Legends Fund. The story behind the creation of this initiative will no doubt be recorded in the history of Kingswood when the next edition of the “Once Upon a Frontier” is written. To this day the Legends Fund continues and through the contributions of many Legends Fund donors on a monthly basis, this Fund makes a huge contribution to the College.

In 2010, notwithstanding his enormous contribution to Council especially o the strategic and human resources fields, and that his business commitments were absorbing more of his time Johnny found time to accept the role of President of Old Kingswoodian Club until 2013. This position is particularly onerous, in that the College Trust Deed places the President of Old Kingswood Club as central to the governance of the College.

Johnny is married to Linda and they have two children Jonathan and Ryan, both of whom came to Kingswood.

It was not surprising that when, Johnny came onto Council and was elected a member of the College Executive Committee he made his mark immediately.

To illustrate this, notwithstanding being recently elected to Council, Johnny, with his deep understanding of employment law issues began guiding the College thinking in respect of bench marking remuneration and benefits, the implementation of a workable performance management system, the principles in respect of employment equity and skills training.

During his tenure as a Council member, he chaired the Human Resources Sub Committee of Council and through this subcommittee one saw probably Johnny’s greatest legacy to the College, with his skill and foresight and participation in several selection committees it put the College’s employment succession plan in place for at least a decade.

Kingswood hosts Prep...
The past weekend saw many of South Africa’s most prestigious cricket playing pr...
Steve Lewy's (OK) An...
A very different term to what we have ever encountered before, but the possibili...
Welcome to 2022 - Mr...
With the welcome rains and our return to the College campus, we look forward to ...
Third Term Senior Sp...
At the Sports Awards Ceremony on the 16 November 2020, all our sports achievers ...