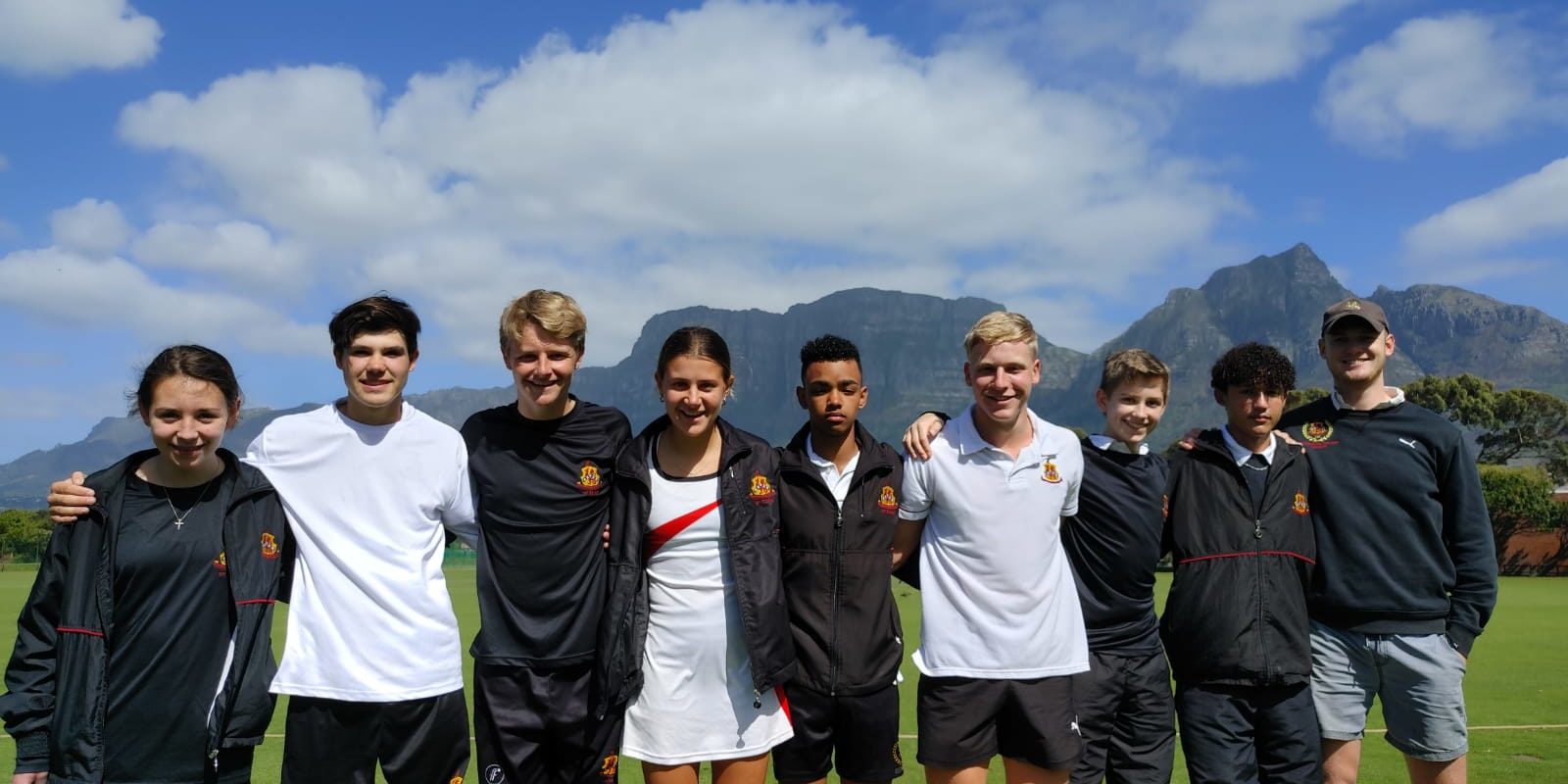 Kingswood played their 1st match against York High at Bishop’s yesterday. The boys played well and edged out York 4/2 (15/8 in games). Angus Brown did very well to fight back and take his match 3/2 in 5 sets and take his maiden 1st team win.

Our next fixture was a local Eastern Cape derby against Grey High School from Port Elizabeth. Played at WPCC, the boys did exceptionally well to match Grey blow for blow and the fixture ended 3/3. Even on the count back there was nothing to separate the two sides as they were also tied in games. TJ Cannon played very well and managed to pick up his first victory for Kingswood.

Two of our Kingswood girls, Elsjé Griesel and Taryn Hurly, also came down on the tour and joined an invitational side (Suikerbossies) and played two fixtures against York High and Menlow Park Girls. Taryn did well to win her first match and was unlucky to lose her 2nd match 3/2. Elsjé battled through an injury but unfortunately had to forfeit her first match but was able to put in a valiant effort in her 2nd and lost in a very closely contested match.

On Saturday morning the Kingswood boys faced off against Disas, an invitational team made up of Western Province players at Bishops. There were some excellent contests and the boys fought hard. We tied on games and lost on the countback 11/10. TJ Cannon played particularly well against a very challenging opponent and showed great determination to hold out for a win after 5 sets.

On Saturday morning the Kingswood girls in the Suikerbossies team played against Herschelle at their home courts. Taryn Hurly had a tough match and unfortunately lost 3/0. Elsje Griesel was also unable to continue as x-rays showed that she had a fractured finger.

On Saturday afternoon the boys competed against SACS at home. The SACS boys put up a good fight and took the first two matches. The boys rallied well and and Brad Goss and Jean-Luc Basson played particularly well to bring the scores level. Luke Kelly and Stephen Aylesbury then took control over the fixture with convincing wins.

Our final fixture was against a strong Menlow Park side. They had not lost a fixture in the festival yet but could not field a full side with their #1 being side-lined with illness. Even though all their players played up a ranking they were still incredibly tough opposition with all the games incredibly tight. Angus Brown went down in 5 sets, while Brad Goss was unlucky to lose 3/1 as none of the games were decided by more than 3 points. Jean-Luc Basson also had an incredibly tight game where he had two match points but ended up losing 3/2 in games and 14/12 in the final set. Stephen Aylesbury, rather unusually, played against one of the top girls players in the country and after a tough match won 3/1. It was however a masterful display of squash from Luke Kelly that sealed the fixture in Kingswood’s favour. Luke went through the event having not dropped a single set! It was thus fitting for him to end his final Stayers’ tour on a high note as he dispatched his opponent 3/0 and this secured an 11/10 win in games.

Taryn Hurly also played some gritty squash as she over powered her opponent from Hermanus High. She started off strongly winning the first game 11/7 and then had a little wobble losing the 2nd 11/5. Taryn re-gathered her momentum and won the 3rd 11/6 and the 4th 11/8 to do her bit for the Suikerbossies who won their fixture convincingly. The Suikerbossies also went through the festival having won all of their fixtures.

We would like to thank the organizers, Western Province Youth Squash and Peter Furstenberg for putting on another great Stayers’ festival.

Honours for Netball ...
Jessamy Pedro receives an Honours Award for Netball. The prizes awarded at Award...
K-Day 2020: How will...
The year in which the world stood still, driven apart by the covid-19 pandemic. ...
Posthumous Neil Agge...
At our annual Neil Aggett Memorial Lecture today, a special award was made to Ol...
#MusicMonday with Vi...
Today for #MusicMonday we feature Victor, one of our youngest music pupils. He b...