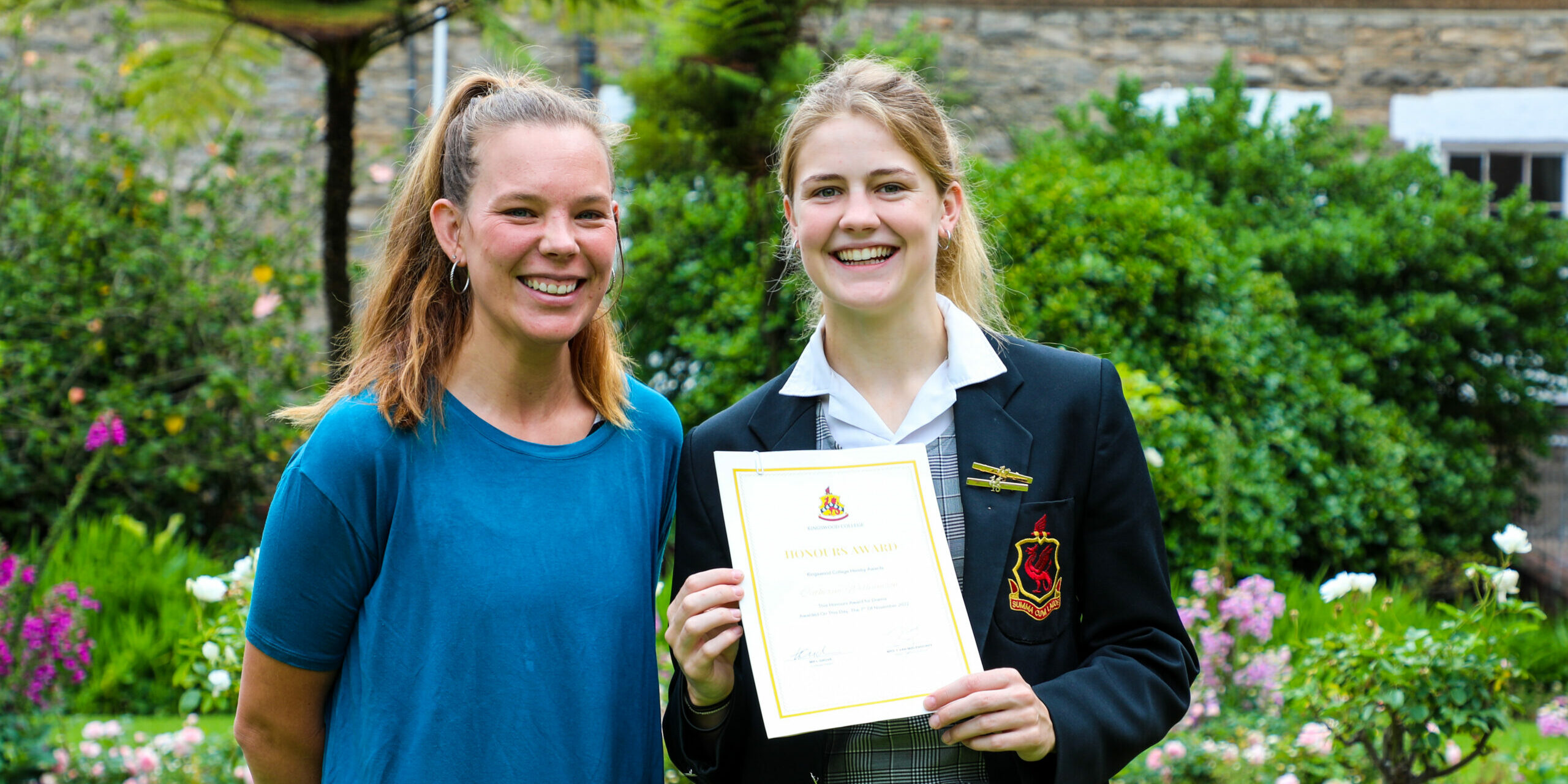 The prizes awarded at Awards Ceremonies that are held each term form part of the formal recognition of pupil achievement at Kingswood College. This award was awarded on the 7th of November 2022 at the Cultural Awards Ceremony and reflects achievements in the cultural spheres at the College.

Catherine has had a passion for performing since her arrival at Kingswood College. She thrives on stage and finds every opportunity available to be involved in any form of performance. Catherine’s ability as a performer was first showcased in 2019, in the Jagger House Junior inter House play. Her performance as a boy was so convincing, it was only when the announcement of Best Female performer was announced that most of the audience realised it was her.

In the same year Catherine followed this performance up with a role in the Senior School production Broken Fences. Catherine was cast in the role of April, a 30-year-old, newly pregnant woman desperate to find a way to make a difference in the world. This role was far outside Catherine’s comfort zone as it required realism and a deep understanding of what drives this character throughout the play. Catherine took up this challenge in her stride and her performance showed an ability to connect with her character on an emotional level and she exhibited professionalism throughout the production, from rehearsals to final curtain call. As a junior Catherine was able to hold her own alongside some of the top Senior performers in the production. She took and applied notes, working constantly to improve her performance and was a vital part of this production.

It is a pity that, due to Covid, we were denied any form of performances, however, this did not stop Catherine from cultivating her performance skills and expanding her repertoire on her own. In 2022 Catherine burst back onto the stage showcasing the growth she had made as a performer.

Catherine was cast as Orin Scrivello, in the Senior production of Little Shop of Horrors. Catherine took up the challenge of Musical Theatre with determination and enthusiasm, never holding back. Her dedication to perfection helped her to cultivate her singing abilities and she has proved herself to be a Musical Theatre performer. Alongside this lead role, Catherine was an integral member of the ensemble and her confidence helped to lead this group through many rehearsals. She helped others when they were struggling with their own characters and her enthusiasm was a constant at every rehearsal. Catherine’s dedication to this production was faultless. She strives for excellence on stage, and this energy is infectious. She has the innate ability to pull the best out of those around her and this was evident in Little Shop of Horrors. Her professional approach and dedication to striving for excellence contributed to the success of this production.

The Jagger House Horror film will undoubtedly be remembered for years to come. Catherine not only played one of the lead roles but was also integral in the writing and production process of this film. Her performance showed an understanding of comic timing and the subtleties needed to pull off good comedy. Her performance, as it did in 2019, aided Jagger House to maintain their winning streak in the Inter House Drama event.

It gives us great pleasure to award Catherine in her honours in Drama, a truly deserved award.

Launch of Cricket De...
In a move designed to bring the sport of cricket to as many young learners as po...
Private schools to o...
As per the Government Gazette published on Friday 22 January, Independent School...
Record-Breaking Cham...
The 2022 Senior Championship Gala saw some remarkable performances. Click here ...
Ash Wednesday 2022
Today is Ash Wednesday, the start of Lent. It is a 40 day period before Easter w...