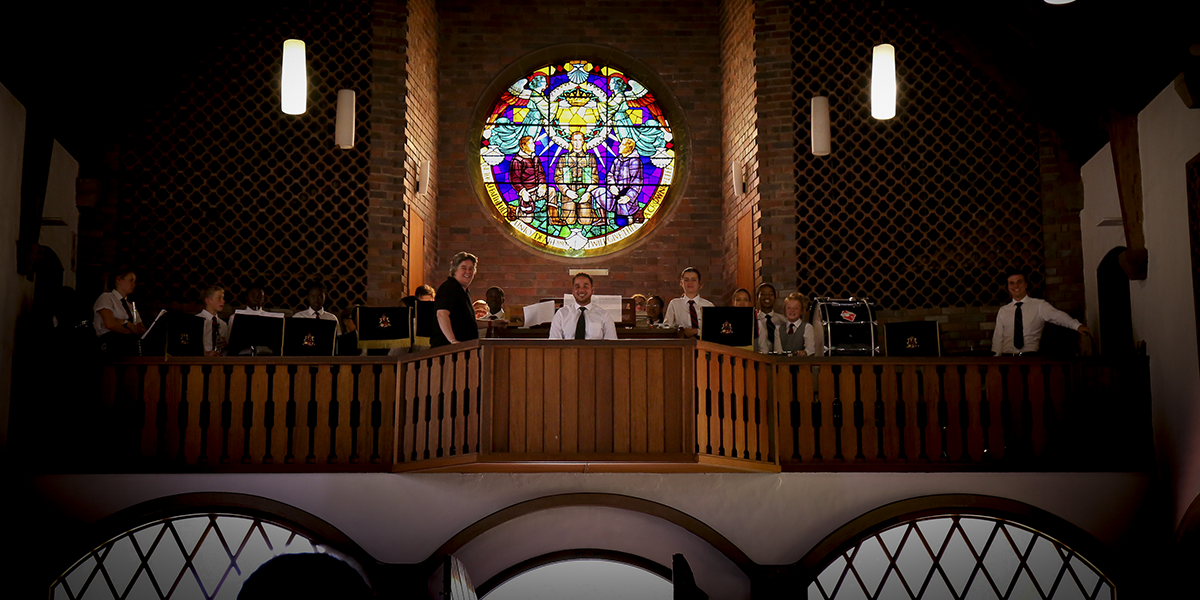 It was presented for the first time in 2004, after it became apparent to the College Council that there was a gap in the school’s award system for recognizing service or benefit to the college that could be regarded as “far beyond the call of duty”.

The College Council decided to institute a new award, to be recognised as the supreme honour that council can bestow, and named it after Mr William Muirhead, one of the original founders of the College. Because of the importance of the award, Council decided that recipients should be announced at the annual prizegiving ceremony of the Senior School.

This year, the Kingswood Council elected to make the award to two of its own – longstanding, loyal and hardworking council members and alumni, Alistair Collier and Anton Vorster.

Alistair arrived at Kingswood Junior School from Johannesburg in 1964 and matriculated in 1970.  He remained at Kingswood in 1971 to complete a post matric year.  A talented sportsman, Alistair excelled at swimming and rugby at school and he probably still has good memories of playing hooker for the winning 1971 side against St Andrew’s College.

After school, Alistair went on to study law at the University of KwaZulu Natal, completing a BA LLB, followed by a Masters degree in Law at Wits, a Business and Management Development and an Executive Development Program at the renowned GIBS Business School. Alistair had a very successful career in the mining industry, working for Anglo American Platinum Mines where he was a senior manager for legal services.  He was  involved in a range of areas, including the governance on the Anglo pension funds.

When he retired from Anglo American, he established his own consulting business, John Collier Environmental Compliance and Governance Research, in 2003.  This is a pretty smart move as it combines his interests in environmental sustainability and golf!  Alistair has successfully run this business in his so-called retirement, focusing on environmental compliance and governance research, auditing and benchmarking for the golf industry, consulting to the Water Sector; and provision of Independent Trustee services within the Pension Fund and Health Care environment.

Alistair has made his knowledge and skills available to his alma mater, serving on the Kingswood Council since 2002, being an active member of our Johannesburg Old Kingswoodian executive, and serving on both our Centenary Trust and the Scholarship and Bursary Trusts.  He was elected Chairman of the Trusts in 2011, a role that he fulfilled until recently with distinction and integrity, and a great deal of wisdom.  One has only to look around at the recent developments on our campus to know the extent to which the Centenary Trust has been able to support the College to upgrade its facilities.  The astroturf, waterpolo pool, High Performance Centre, Cohen teaching block, Kirkby House and new Junior Girls boarding facility are all products of the wise and generous disbursements of the Centenary Trust, and Alistair has been involved in varying ways in all these developments.

The Kingswood Council has also benefitted greatly from Alistair’s key area of expertise –  corporate governance. He has often reminded Council of the separation between governance and management and the importance of following due process. He has led the Council on governance documentation and ensured its compliance with King IV standards. The latest edition of the Kingswood Council Governance Manual, developed by Alistair, places Kingswood as a leader in the education field.

Alistair’s contribution on Council sub-committees is well known and he has an impeccable attendance record.  He is always fully prepared and committed to the task at hand, willing to show up, and work hard.   His legal training means he is diplomatic and tactful, not afraid of being direct when necessary and always decisive. When Alistair speaks, people listen! His passion for Kingswood shines through.  His generosity with his expertise, time and regular financial contributions has been nothing short of astounding.  Kingswood College is indeed proud to call him one of their sons.

Alistair is married to Judy and they have three children Kate, Murray and Alison, two of whom came to Kingswood.  They also enabled their nephew, Mark Taylor, to attend the College.  This is one tight Kingwood family!

A more worthy recipient of the prestigious Muirhead Founders Friend Award would be hard to find.

Having said that it would be hard to find a more worthy recipient of the Muirhead Founders Friend Award, I have another!  It seems that Kingswood is blessed with ‘good and faithful servants’!  Another Old Kingswoodian who has gone beyond the call of duty in serving his alma mater is Anton Vorster.

Anton comes from a solid Kingswood family – his father was an Old Kingswoodian, and Anton came here in 1972, the youngest of three brothers who had all been here before him.  He matriculated in 1977, and we have since seen his three children, James, Mark and Shirley all matriculating here.  And if his wife Cathy thought she was going to miss out, that hasn’t happened as she’s been working here for many years, first as Secretary to the Bursar, the Travel Officer and now in the Sports Office.  She’s about as Kingswoodian and you can get without being an alumnus.

Anton was elected onto the Kingswood Council in 2001. He was initially tasked with the portfolio of “Council member providing personnel expertise” in 2002 to 2003 and then became the Honorary Treasurer to Council from 2004. He stepped down from this role in 2006, handing over to Hugh Collett.  However, once Hugh retired from the Council, Anton was once again approached and requested that he return to take over the portfolio as well as identify and mentor someone new into the role.   Our request came at a difficult time for Anton because he was newly appointed as the CEO of GBS Mutual Bank.  However, he did not hesitate and accepted very gracefully.

Anton took over as Honorary Treasurer for a second term in 2016.  In presenting the audited financial statements at the annual March Council meeting, the minutes quote him saying:

“Council was reminded that it carries the responsibility for the preparation and presentation of these Audited Financial Statements.”  –  a role which he took very seriously as the Hon Treasurer.  He identified the talented Jonty Fincham as his successor, nominated him to Council in 2016 and handed over the reins in March 2018.

Our Business Manager, Steve Gardner who has had a very close working relationship with Anton over many years commented: “Anton executed his role as Councilor and Treasurer very well having the ability to foresee pitfalls and was never afraid to speak out.  Anton likes trends – the budget analysis spreadsheet was designed by him and is still in use!”

Also in 2016, the College Council appointed Anton to the Centenary Trust. He was highly respected as a Trustee and a great asset to the committee.  According to Steve Gardner, Anton’s ability to present a balanced approach as both a Trustee and as a Councilor was particularly recognized and valued.  Anton graciously stepped down as a trustee in 2019 in order for Mr Geoffrey de Jager to be nominated as a Council-appointed trustee.   This is the measure of the man, always focusing on the interests of his alma mater rather than his own.

Another Senior Counsellor who has worked closely with Anton is Alistair Collier.  He had the following to say about Anton:

“Every team requires players with different skills for the team to be successful, whether it is on the cricket field, or business environment or even at Kingswood.  One of those team players has been Anton Vorster. I have worked with Anton for well over a decade on the Kingswood Centenary Trust, the Kingswood Bursary and Scholarship Trust, the Kingswood Council, Exco and sub committees.

In cricketing terms his innings with Council has been exemplary, we know Anton declared his innings closed a year or two ago only to be recalled.

In his quiet astute manner he was just the type of player one needed from a strategic perspective. Anton always asked in a measured way –  the right question at the right time!”

Anton’s exemplary service as Honorary Treasurer and Trustee on the Centenary and Scholarship and Bursary Trusts speaks for itself, but this is not all.  He has played many other important roles for the school that need mentioning.  Being a local, Anton is called on frequently to help navigate difficult situations.  His principled and wise counsel is greatly valued, as well as his ability to bring balance to a situation without getting emotional but remaining empathetic.  He is always willing to step up when asked to do so, quietly and without fanfare.  We owe him much for his very authentic service to the college – he has shown his deep passion and commitment over and over again. Value is not counted in years of service but it must be noted that Anton has served for 19 years on the Kingswood College Council.

For his deep love of, and generous service to –  Kingswood College, we recognise Anton Vorster today and award him the Muirhead Founders Friend award.