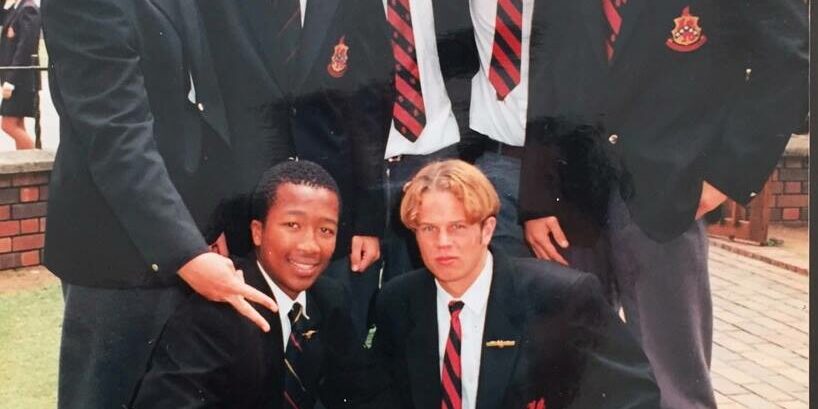 We are very sad to announce the passing of Chuma Mbambisa (’97) There is no question he was incredibly loved and considered a Kingswood legend by all his peers. Please find below a wonderful tribute by his close friend and OK Stuart Donnachie.

Kingswood College has lost one of it’s finest sons this past week. Chuma Mbambisa (1997) sadly passed away on Wednesday 15 August in a traffic accident in Johannesburg.

Chuma first walked onto the campus and down Burton Street in 1988. That year being the beginning of his boarding school adventure at Redfern House. Once in the Senior School, he ultimately become a Jagger House legend and a College prefect. Along the way he became a brilliant cricketer scoring a calypso style 100 against Graeme College (which actually came up in conversation the day he passed away), a hard running hooker who represented the First XV receiving his colours and a formidable tennis player. I’m assuming he did well enough in academics, although that was never spoken about as much as sport! When it comes to sport or life, wherever Chuma lacked in skill, he made up for with his hilarious banter and art of deception!

After his time spent at Kingswood, Chuma completed a Bachelor of Commerce (B.Com.), Information Systems and Economics at Rhodes University and then moved up to Johannesburg to forge a career in both the Project Management space as well as his latest role within the management team of a car auctioneering company.

Chuma was a very keen golfer and a regular at many golf courses and Old Kingswoodian functions in and around the Gauteng area, regularly taking money off of friends after blitzing them on the course and then regaling them with hilarious tales at the bar long into the night thereafter. He was a fierce defender of the Springboks and an even greater supporter of the Proteas. Often he would turn up to events or sporting occasions wearing his Old Kingswoodian tie. Some reckon it was the only tie he ever owned and definitely the only tie he ever wanted to wear. Thus time and time again showing his pride and honour of having attending Kingswood.

Ultimately the most outstanding thing he ever did in his short time on this Earth was be himself. Just the simple act of being himself, lead to the forging of friendships that lasted from those years as a fresh-faced kid, up until the hours he passed away. With many of us having spoken to him that day both on the phone and social media. He could never admit he wasn’t loved dearly and immensely.

Chuma is survived by his stunning wife Tshepi, his wonderful mom and dad Dr Pinkie Bala-Mbambisa and Dr Zweli Mbambisa as well as his beautiful sisters Bayanda and Yolisa, with both sisters having attended Kingswood College themselves.

Chuma was humble, a shining light and a leader, the pure essence of what the College embodies. Chuma had loyalty, passion, kindness and a thirst for life in abundance. His passing is being felt in all corners of the world and this is testament to the boy who first walked through the doors at Redfern House to the man he became many years later.

Say not in grief: “He is no more”, But live in thankfulness that he was.

2021 Annual Kingswoo...
On the 28th of December 2021, the annual Kingswood Golf Day took place at The Ro...
Women’s Month Series...
KC Women's Month Series: “…as much as you can plan your life and have various c...
Junior School Founda...
Laughter and shrieks of excitement rang out across City Lords yesterday afterno...
Ms Cornelia Retires ...
One person who is almost synonymous with The Wyvern itself, is Ms Cornelia Sandi...