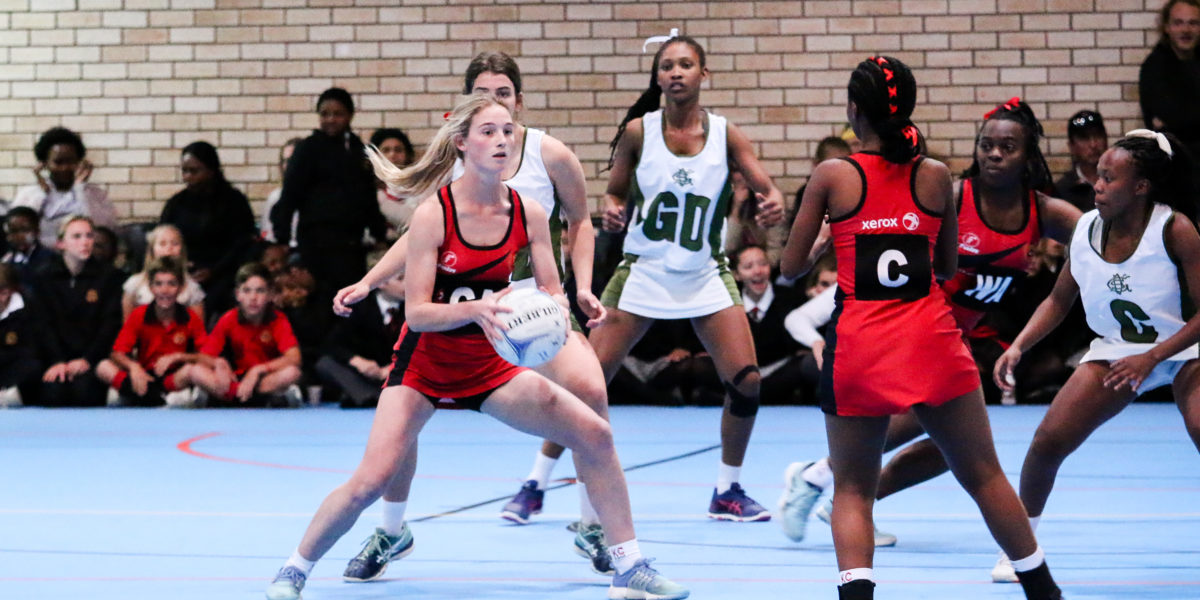 Friday 14 July 2019 was the long awaited day where Kingswood College Netball were to play against DSG Netball at an annual K-Day Derby.

The HPC was buzzing with excitement, spectators booked seats hours before the match started, and waited in anticipation to watch the 1st team game as it was always a closely contested match in the past. In the past five years, Kingswood has won it twice, in 2014 and 2018, and DSG taking it 3 times in 2015, 2016 and 2017.

The match was of high standard and was officiated by two highly qualified EP netball umpires, Theresa Prince and Euleen Grobbelaar. Ms Prince is also an International Netball Umpire.

Kingswood Netball was under pressure as they came into this match with a low percentage of wins compared to the opposition. Looking back at each team’s performance at Saints Netball Festival earlier this year, Kingswood lost all 8 matches with DSG winning 6 out of 7 matches they played.

The game got under way and we saw DSG taking the first 2 goals and that put KC under more pressure. Closer to the end of the first quarter, DSG were 4-1 up. Our Kingswood girls fought back and the communication within the shooting circle worked well with Sara Keevy and Amy Mills rotating and working hard to make themselves available for a pass. The 1st quarter ended with KC leading 6-5.

A physical game at times, but DSG really pushed themselves to achieve a high number of interceptions and turnovers. Our girls started to make unforced errors, forcing passes inside the circle, not attacking the ball and making it very easy for DSG defence to intercept. Our team was hit hard by being forced to take Carina Kemp off the court. At the end of 2nd quarter, the score was 14-9 to DSG.

In the the 3rd quarter, KC was struggling to get balls into their shooting circle and had to make technical changes and reshuffled their players. That worked very well as we saw KC playing their hearts out, converting every shot at goal and making numerous intercepts. KC won that quarter 8-4. KC missed a very crucial goal at the end of third quarter. The score after the third quarter was 18-17 to DSG.

At the fourth quarter, KC did not make any changes. DSG brought back their strongest shooter to finish the game. There were no easy goals for either side. It all came to mental strength at the end, with DSG coming up top.

A thrilling, high standard of Netball played by two very well matched teams resulting in a 26 – 23 win to DSG.

#Wellnesswednesday: ...
This week's #WellnessWednesday message comes from our Rev Tim Marshall. Read as ...
Grade 12 Maths Camp
Our campus has been slowly reawakened with the return of a number of pupils for ...
Building Relationshi...
In February this year, our Grade 11s embarked on a Community Engagement project...
2022 OK Club Tie Pre...
The Old Kingswoodian Club welcomed the Class of 2022 as new members by presentin...