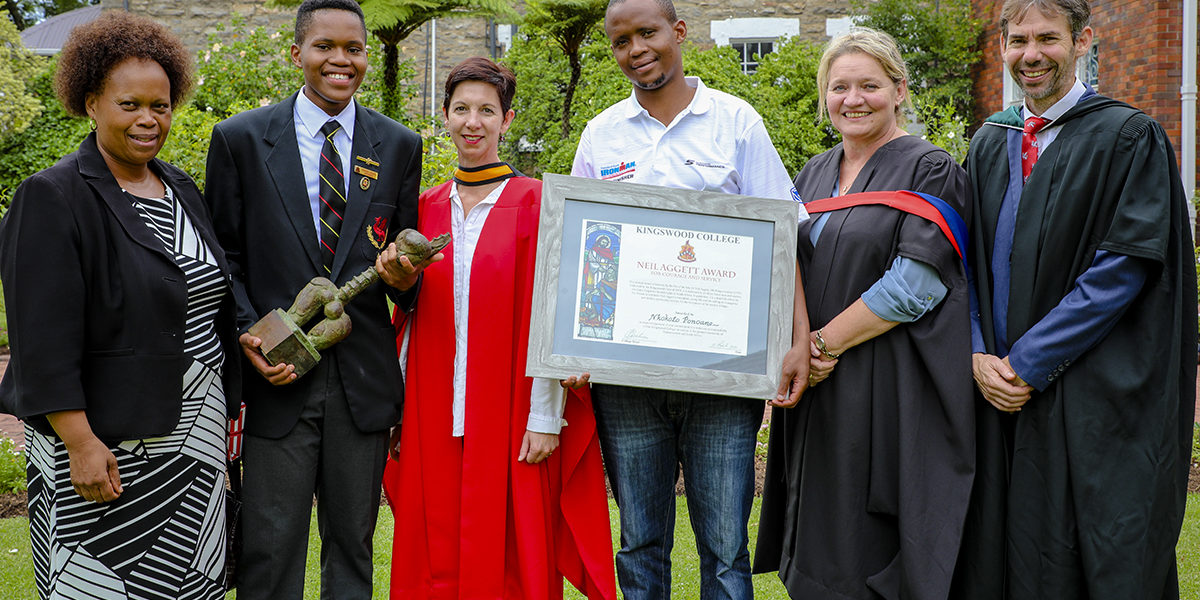 On Thursday morning, 12 March 2020, the annual Neil Aggett Memorial Lecture was delivered at Kingswood College. The lecture takes place each year to celebrate the life of Dr Neil Aggett and to honour his legacy. The celebration of his life is now more pertinent than ever.

This year, Kingswood College welcomed Mrs Nene Molefi, as the speaker at the 14th annual Neil Aggett Memorial Lecture. Mrs Molefi is the CEO of Mandate Molefi HR Consultants. Over the past 18 years she has gained a reputation, both locally and internationally, as a thought leader in Diversity and Inclusion, Values-Driven Leadership and Transformation. She is a regular presenter at conferences around the world and is an expert panellist for a Diversity and Inclusion Benchmark Tool. She is also a member of the Diversity Collegium which is a think- tank of globally recognised diversity experts.

In her presentation, Standing up against Injustice, Mrs Molefi delivered a thought-provoking address around the idea of diversity and inclusion and stated that Kingswood should be commended for keeping  Dr Neil Aggett’s memory alive.

She went on to emphasize that each one of us has a responsibility to at least one person and that all of us have a responsibility to society and that we need to be the change agents. She spoke about privilege and power, and although Neil Aggett, in this day and age, would have been considered as coming from a position of privilege, he used this in service to others and to stand up for those not as privileged as he was.

Each one of us has the power to become a change agent in our own lives and perhaps, in some small way, in the lives of others. We need to work towards being an ally for inclusion and we have to practice eldership. Each of us has both conscious and unconscious biases and while we need to recognise them, they should not be a reason to divide us from others.

Aggett attended Kingswood College from 1964-1970. He graduated as a medical doctor from the University of Cape Town and went on to work in a hospital in the Transkei and later at Baragwanath Hospital. He was deeply concerned with the hardships endured by black South Africans under the Apartheid regime and left his medical career to become involved in the black trade union movement. In late 1981 he was detained for “interrogation” by the Security Police and was found hanging in his cell at John Vorster Square in February 1982.

The prestigious Neil Aggett award was founded by members of his Class of 1970 to foster a spirit of “individual service above self” in young men and women of Kingswood College. It pays tribute to the recipient’s true commitment to a wider social responsibility within the College, as well as to the greater community of Grahamstown and South Africa.

Tsepo has always shown a deep understanding of the key issues which impact on those in his community and has stood on the side of fairness and social justice in debate around the well-being of his fellow pupils.

Above all, Tsepo has shown bravery by challenging and standing up for issues in which he believes, even when it is not the popular view. This, combined with his innate sense to serve others and his understanding of UBUNTU and selfless, giving to a greater cause than himself,  mirror the qualities that were found in the late Neil Aggett and make him most worthy of this Neil Aggett Memorial award.

Chairman of Council, Mrs Diana Hornby, noted that Tsepo is a shining example of “living community engagement”, merely rather than doing it, and Kingswood is exceptionally proud of this young man.

This year, a special award was also made posthumously to Uyinene Mrwetyana (Old Kingswoodian 2018) who was tragically killed in 2019. A small excerpt from her citation states: “…The impact of her death has been significant … and the fact that a Kingswoodian could raise such awareness should not go unnoticed…”

Mrs Molefi concluded her talk by calling on the youth to take on the responsibility of becoming leaders of social change and stated that all of us can make a difference and that we have the potential to stimulate courageous conversations.

Avoiding the trap of...
College psychologist, Mrs Teresa Yell has a message to share with us for #WELLNE...
Kingswood girls exce...
1st Team Report The girls’ first team water polo travelled to PE for the Ale...
Academic Honours Cit...
To Qualify for Academic Honours, one must achieve a total of 580 marks (an 83% m...
Kingswood girls shin...
This year saw Kingswood return to the Jason Murray U14 Water Polo tournament h...