Celebrating the 21st anniversary of the ‘Viva Vienna Music Tour’ 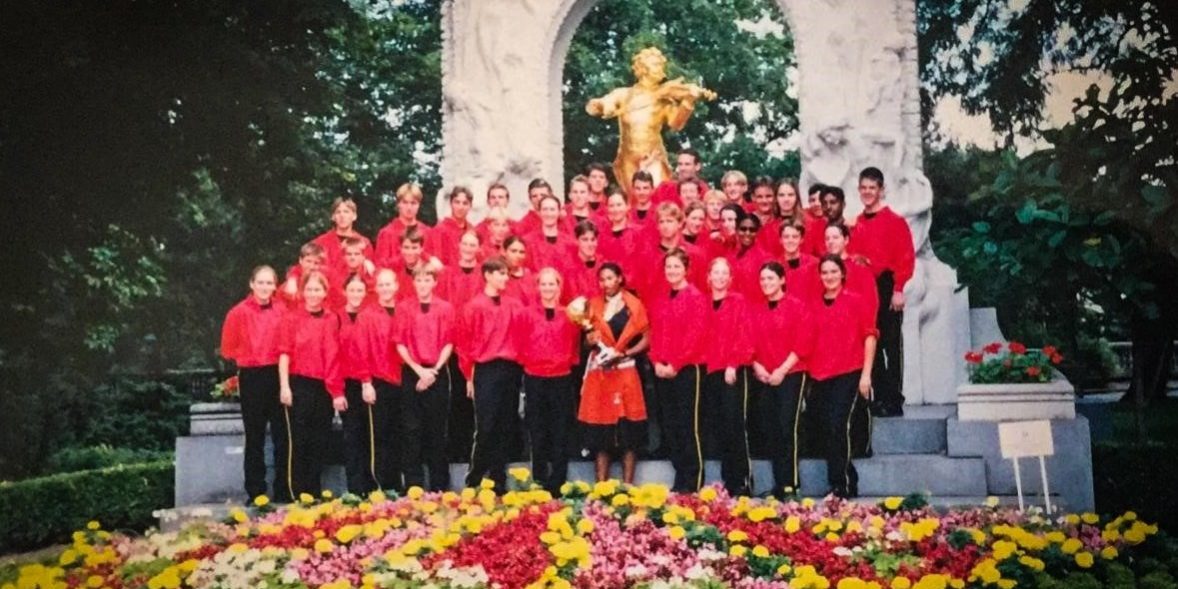 Travel back with us as we mark the 21st anniversary of the ‘Viva Vienna Music Tour’ for this week’s #ThrowbackThursday.

The 13th of July marked 21 years since this historical moment when the Kingswood Band won the Band Category at the International Youth and Music Festival in Vienna, Austria. On this day in 1999, the Band marched through the streets of Vienna to St Stephen’s Square led by Drum Major and Headgirl, Anele Ludidi, who was resplendent in her traditional Xhosa attire.

How did we get there?

In 1996 and 1998 the Kingswood College Concert Band won the School Wind Orchestra Section of the biennial Tygerberg Fanfare in Cape Town. As a result of this the Band was invited to perform at the 28th International Youth and Music Festival in Vienna, Austria.

There was much excitement as preparations for the tour got underway and thanks to many generous donations from the OK Club and parents, sufficient funds were raised to send the Band to Vienna in 1999.

The Band members rehearsed for hours to prepare the Tour repertoire which consisted of 15 pieces. These included music from the classical period such as “The Marriage of Figaro Overture” by Mozart and “First Suite in E flat Opus 28 No.1” by Holst, to modern music including Eric Clapton’s “Pop and Rock Legends” and “Big Band Spectacular” arranged by John Higgins. One of the most challenging pieces was “Kraal” from Intsolo Ye Afrika Suite by William Haubrich. This piece formed part of Band’s Competition programme on 12 July.

We managed to get in touch with some individuals who were part of this momentous occasion earlier this week to hear about their experience:

We spoke to Mr Ian Smith, Director of Music and Band Conductor at that time, and asked him what he was doing 21 years ago:

“14 July 1999 – I celebrated my birthday in Budapest! That evening we played a concert outdoors in a castle to an audience of over 500 people. The next day was our last before flying home. We took the Band into the city. Well, big mistake! We lost three boys that afternoon. Anyone who has been to Budapest will understand. Now one must remember that there were no cellphones in those days so this was mega stressful! Eventually they managed to make contact with us. A kind lady put them on a train and it took them half an hour to get back to where the bus was parked. That’s how far they got lost. We returned to Vienna that evening and flew out in the morning. Our plane was supposed to land at 17h00 at OR Tambo and a reception had been organised for us. Well, the plane was delayed in Milan and we only arrived at 01h30 in the morning!”

“My anecdote” says Alastair Billing, who played 2nd trumpet on the Tour and was in Grade 9 at the time: “The teamwork and dedication in both the build-up to and on Tour certainly taught us all that, when the going gets tough, the tough get going. It was an honour to be a part of a world class team under Mr Ian Smith. Winning the cup was certainly the highlight, followed closely by a flip on a bungy rocket and experiencing a legitimate and authentic Sunday beer tent in Germany – even though we were only allowed coke in our litre mugs. Oh well, PROST…”

Nicola Behrens, also in Grade 9 that year, played mallet percussion. She says “What a privilege it was to be able to travel around Europe with the Band! I can’t quite believe it was 21 years ago. I have so many wonderful memories, surprisingly, one of my favourite and most vivid wasn’t of playing music, but rather, wandering through the cobblestoned streets of a one of the quaint German towns in the pouring rain, munching on a punnet of fresh strawberries with one of my friends. To this day when I buy fresh farmers market fruit, I’m reminded of the taste. And I still love to wander about or do a cheeky dance in the rain!”

While we are in Covid-19 Lockdown, we would do well to take our cue from Nicola and to “do a cheeky dance in the rain!”

JEFA invasion at Kin...
“…Creativity is the secret sauce to science, technology, engineering, and math…...
New Pupils Day - the...
And just like that, after all the anticipation and excitement New Pupils Day 202...
Grade 12 Leavers Din...
Last night our Grade 12s gathered in the High Performance Centre for their Leave...
Kingswood College Ma...
The Kingswood College Matric Class of 2018 has generated impressive results of...