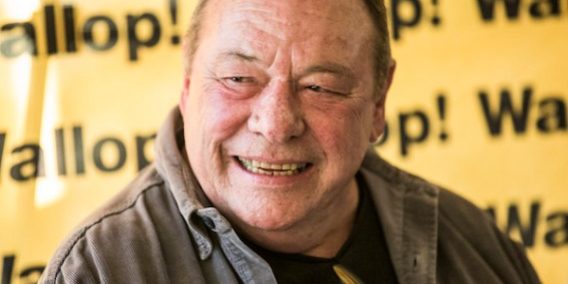 Brian Searle-Tripp (OK 1957), one of the local advertising industry’s creative greats, passed away in Cape Town at the age of 80 on 05 October 2020. Kingswood was always dear to Brian and in fact, he married his lovely wife Marina in the Kingswood Chapel.

Tributes poured out online when the news of Brian’s passing was released. This one below is thanks to The Media Online website, written by Mr. Andy Rice:

Brian was a legendary art director and, in 1976, one of the founding fathers, with Roger Makin and the late Bob Rightford, of the Cape Town agency Rightford, Searle-Tripp & Makin which became a powerhouse, and through a partnership with Ogilvy & Mather, achieved global recognition.

Fellow co-founder, Roger Makin, says; “Brian slept, ate, drank and smoked advertising. I’ve had a lot of luck in my life, but my biggest stroke of luck was being partnered with Brian, by Allan Raaff, as copywriter and art director. We had a tremendous rapport, and often, while a client was briefing us on a campaign, Brian would smile at me and I’d smile back as we’d already come up with the big idea.  We were, as they say, ‘joined at the hip’, and I feel that a part of me has died.”

Brian, a larger than life character, was one of the driving forces of the Red & Yellow School of Logic and Magic which he helped to found in 1994.

In 1995 he became the first recipient of the South African Creative Directors’ Forum Hall of Fame award. In 1996 he was the Financial Mail’s Advertising Achiever of the Year.

Ogilvy Cape Town managing director, Vicki Buys, says “Brian’s contribution to our agency and our industry was immense, his legacy lives with us to this day. We have lost a giant”.

Brian was involved with the creation of a number of legendary advertisements that many of us will remember such as the Volkswagen ad with David Kramer and the Lion Match ad that was a double page ad in the Sunday Times based on the proposition that when you get a lion you get a friend.

Tribute to Gordon To...
Gordon Stewart Todd was Headmaster at Kingswood from 1980 - August 1986. In the ...
Women’s Month Series...
KC Women's Month Series #9: Ms Fundiswa Zote is a formidable businesswoman who h...
Rest in peace, Mr Ga...
Today, Kingswood mourns the loss of and celebrates the life of Mr Steve Gardner ...
Megan Fletcher Award...
The Neil & Faith Collett Cup was awarded at the Gr 7 leavers’ dinner held at the...