Neil Aggett Memorial Lecture 2022: “Standing up against injustice” with Zapiro 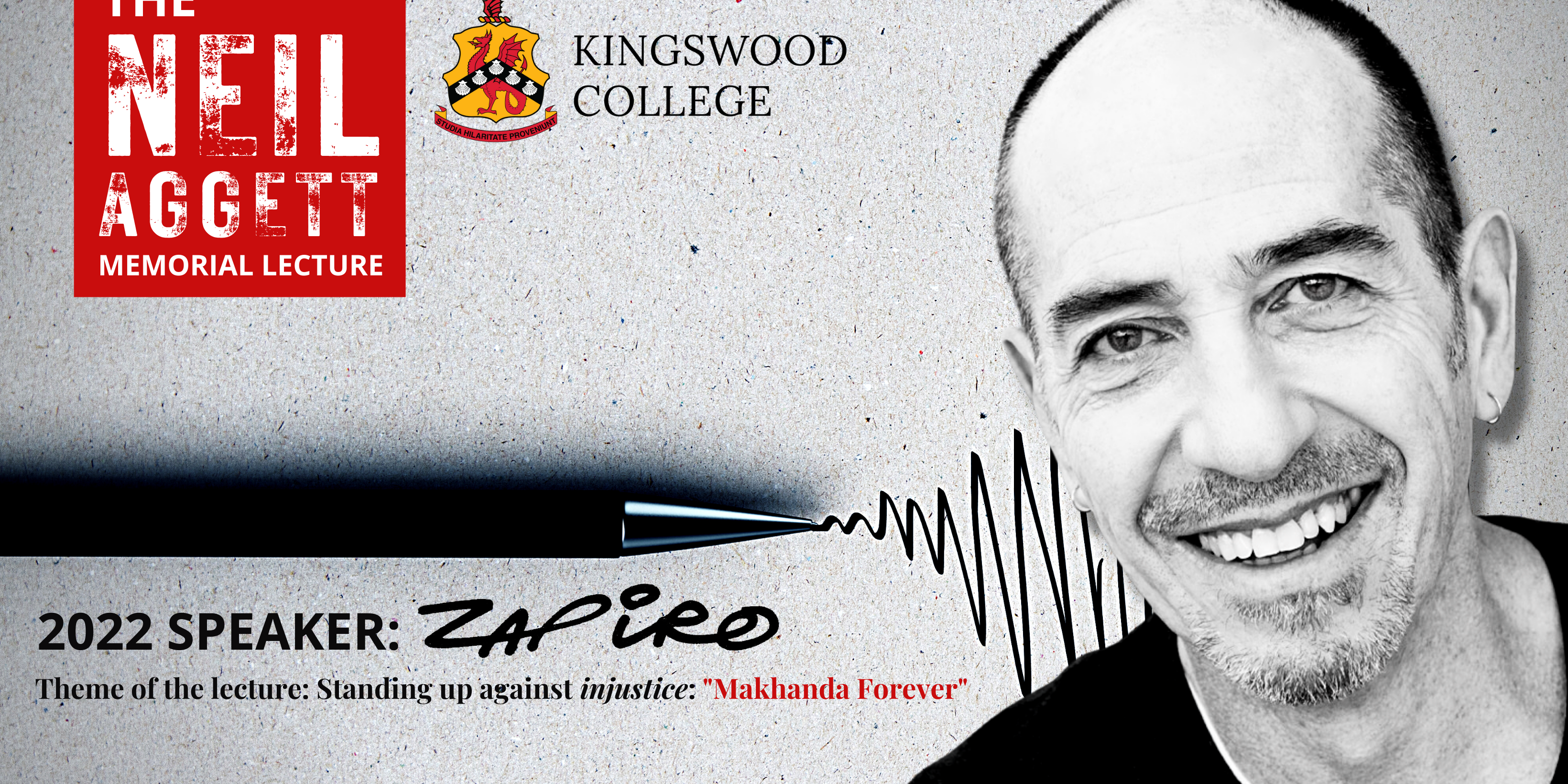 We are privileged to be able to have Zapiro as our 2022 speaker at the annual Neil Aggett Memorial Lecture. The theme of this talk is “Standing up against injustice” and the title of Zapiro’s talk is “Makhanda Forever”.

Every year Kingswood College hosts a memorial lecture in honour of Neil Aggett, a former pupil who paid the ultimate price during the anti-apartheid struggle for liberation. The lecture is a tribute to all those brave men and women who laid down their lives in the fight for human rights and social justice.

Second event: A night with Zapiro

This event is in celebration of the 10th anniversary of the Legends Bursary Fund, and the transformative impact it has had on the lives of so many in those years. All proceeds will go towards growing the fund for future generations of Kingswoodians. To find out more you can click through to the event page: A night with Zapiro

ZAPIRO (aka Jonathan Shapiro) is South Africa’s best-known and most-awarded cartoonist. His career began in the late 1980s and is today recognised nationally and internationally as an influential social commentator through his political cartooning. He works as the editorial cartoonist for Daily Maverick. Previously he was editorial cartoonist for the Sunday Times, the Mail & Guardian, The Times, the Sowetan and for Independent Newspapers. He has published 25 best-selling annuals as well as 4 special collections The Mandela Files, VuvuzelaNation, Democrazy and WTF: Capturing Zuma—A Cartoonist’s Tale. Resulting from hard-hitting cartoons about President Jacob Zuma, he has twice been sued by Zuma for defamation. At the end of 2012, Zuma dropped one of the lawsuits (a R5 million claim over the 2008 Lady Justice cartoon). In May 2013, Zuma dropped the earlier R10 million lawsuit from 2006.

Zapiro has held solo cartoon exhibitions internationally and many in South Africa. He has won numerous international and SA awards and was voted by magazines Jeune Afrique, New Africa and Credit Suisse as one of the most influential people in Africa. In 2005 the Prince Claus Fund of the Netherlands awarded him the Principal Prince Claus Award. Most recently in 2019 he was appointed Chevalier de l’Ordre des Arts et des Lettres (Knight of the order of Arts and Letters) by the President of the French Republic. Among his many accolades, he also has two honorary doctorates in Law and in Literature.

Virtual Information ...
Live in Zambia or Zimbabwe and want to learn more about Kingswood? Spend just a ...
Kingswood College Wa...
Join us for a fun, interactive and full training camp focusing on skill developm...
Legends Golf Day 202...
Join us on Friday the 11th of June 2021 for the annual Kingswood Legends Golf Da...
Kingswood Port Alfre...
What better way to end 2020 but by joining us for the 21st annual Kingswood Golf...