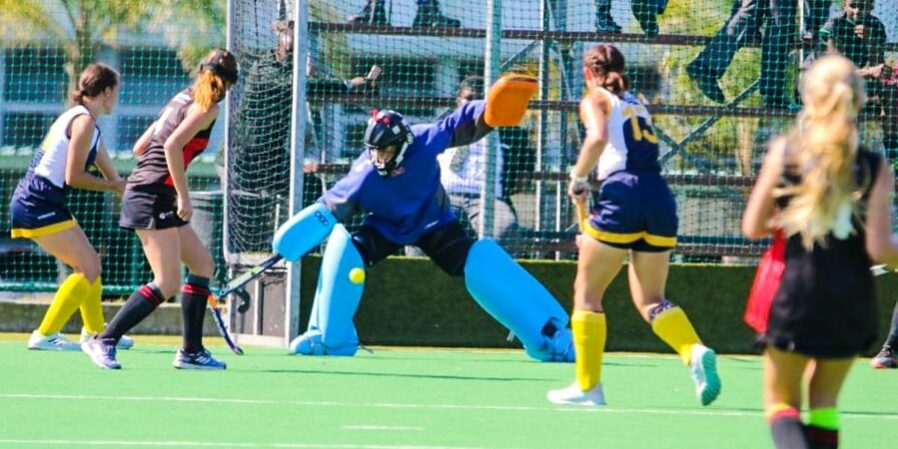 Both of our 1st XI Hockey teams got to travel to East London this past weekend to take part in Tony Godding Festival and the Greg Beling Festival (boys and girls respectively).

The girls come out firing by taking their opportunities against a strong Sasolburg team. Our girls managed to keep a clean sheet with Anna Mackay making some telling saves and keeping them away from falling into the 2-goal trap.

The Boys were put under lights on Friday night against Cambridge. Our boys immediately put Cambridge under pressure with two quick opportunities on goal but this seemed to have been the story for the rest of the match.

Our girls then faced a strong Rhenish side but this did not phase the team as we went up a goal in the first chukka. Kingswood soaked up a lot of pressure until Rhenish grasped 1 goal back. Kingswood managed to orchestrate some good attacking opportunities down the right-hand side of the field and it was just a matter of time until we got the 2nd goal. Unfortunately, Rhenish came back with 1 of their own. Halt-time the game was evens at 2-2 but Rhenish had other ideas and the game ended with the girls going down 2-5.

The boys then came face-to-face with Merrifield and they were ready for a strong fight. The game got very unstructured but our boys managed to pick up on the opponents mistakes to grab a goal. We were still struggling to keep all our players on the turf but managed to keep them out of our goals to come out with a 2-0 Victory.

The girls took on GHS next, it was a fierce and physical battle but the girls kept their discipline and structure, which led to two goals from penalty corners. The boys came up against Queen’s College after a short turnaround from their previous match. The boys showed great heart and discipline in defence, which gave us yet another clean sheet.

On attack, our boys took authority and made their chances count by burring three magnificent goals.

On Sunday morning the boys played a very quick and structured Grey College side, nevertheless, the boys were up to the challenge. Within the 1st chukka we had a great goal scoring opportunity and the Grey keeper pulled off a blinding save. Our Kingswood boys maintained their structure and discipline well against one of the top schools in the country. We were never outplayed as the team worked as a well-oiled red & black machine and often ask questions of the opponent’s defence but the game ended up in a draw.

The girls took on yet another physical side, Outeniqua. The girls showed some great skill and patience in the circle to create a few penalty corners. This early pressure on the opposition allowed a well-worked penalty corner and a great strike which put Kingswood on the board. After a long weekend of hockey, the girls came under attack but yet kept the Outeniqua girls as bay to defend their lead to victory.

All-in-all it was a great weekend for both teams after not being able to play hockey competitively for close to two years. Both teams have proven that they are a force to be reckoned with and are a space to watch this season. Well done Kingswood Hockey!

The U13 Boys played 5 games and achieved the following results:

It was wonderful to play in competitive matches again and the standard of the hockey was very high. We look forward to the rest of the season.

The festival format lent itself to playing competitive hockey in an environment that promoted collegiality, friendship and camaraderie.

Well done to Kingswood for hosting a truly successful event!

13th Annual Neil Agg...
This morning the annual Neil Aggett Memorial Lecture took place at Kingswood Co...
We're New: Kingswood...
Our newly formed KC Brass Ensemble are very excited about performing at the Bed...
Welcome to Kingswood...
Cricketers at Kingswood are in for an exciting start to the season as we welcome...
Inspiring Future Sci...
One of the most unique things about Kingswood College is the fact that we have a...