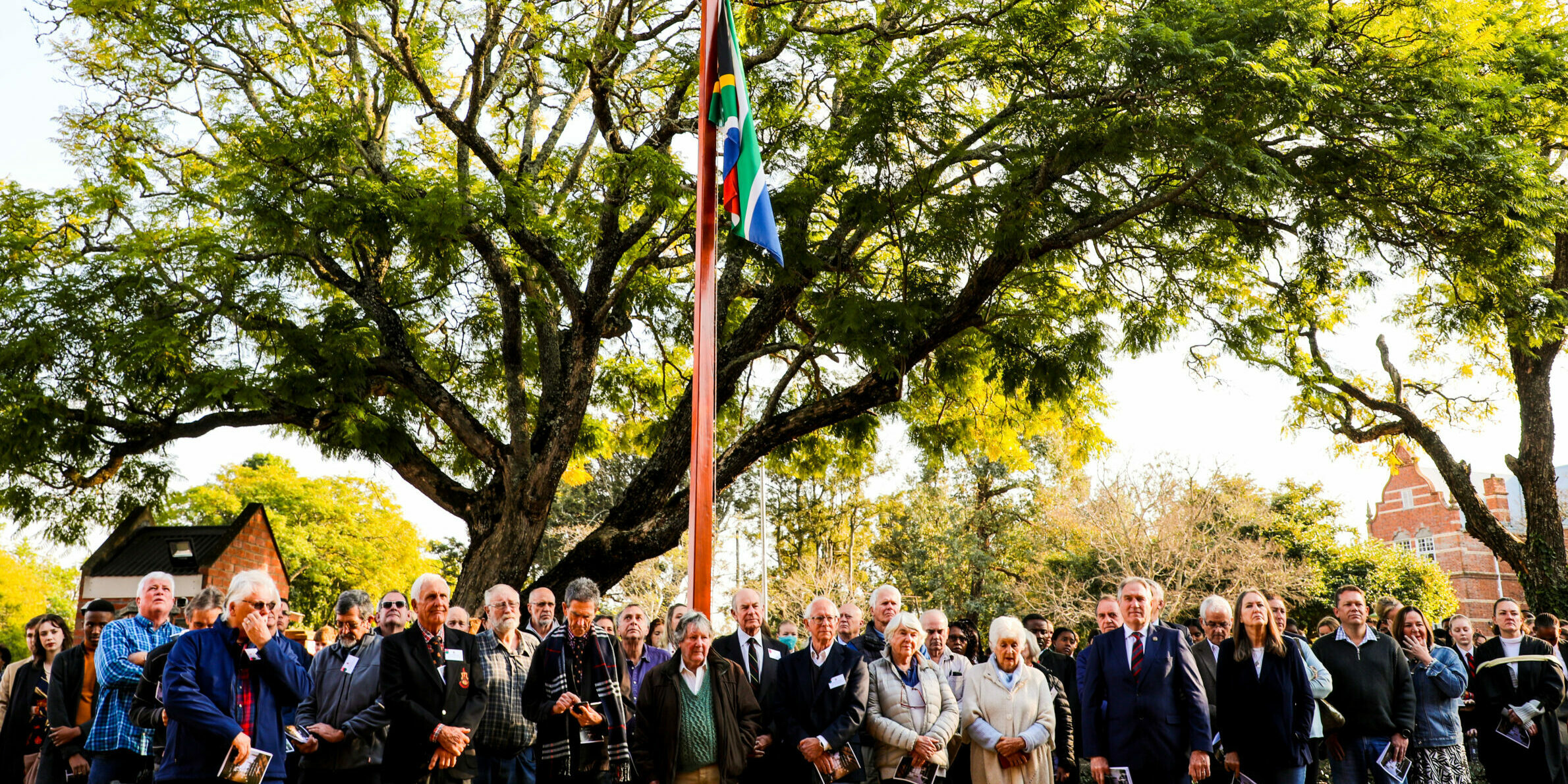 On Sunday the 10th of July 2022, we celebrated the 60th anniversary of the Kingswood Memorial Chapel, which opened its doors in 1962 and has been the heart of Kingswood ever since.

The Kingswood Memorial Chapel ( built in remembrance of all Kingswoodians whose lives were lost in the violence of World War 1 and 2) was opened in 1962 with over 2,000 people present. On Sunday we celebrated this milestone with a special service in the Chapel. There were also a number of reunion groups in attendance – 1960-62 and 1970-72.

As is tradition, the proceedings started outside with the Colour marched to the front of the Chapel. This year it was held for the first time by the Head Chapel Steward (Skye Mackenzie). Honouring its founding, the heads of each of the College’s seven houses then read out the names of Old Kingswoodians who gave their lives in the First and Second World Wars.

After the reading of the names, wreaths were laid at the foot of the memorial plaques by Mr Richard Gaybba (Vice President of the Old Kingswoodian Club), Mr. Leon Grove and Kesentri Governder (the College Head and Head of the Kingswood College Council respectively), and the Head Boy and Head Girl for 2022, Luke Kelly and Catherine Williamson. These were on behalf of the Old Kingswoodian Club, the College and the pupils.

After the laying of the wreaths, the Kingswood flag and the school Colour were lowered to half-mast during the sounding of the “Last Post” and returned to the peak (masthead) to the sounding of “Reveille” in what is always a deeply moving part of the ceremony.

After the ceremony, the congregation moved into the Chapel for the service.

Being a significant anniversary, there was a beautiful video tribute produced by Kingwood Chaplain, Rev Tim Marshall that took the congregation through the history of the Chapel, and then shared meaningful messages from past Kingwood Head Chapel Stewards and Chaplains.

Thank you to the following people who contributed to this special occasion:

Significantly, we were honoured to have Mr Glen Witte as part of the service. Mr Witte was Head Boy in 1962 and during the service read the same passage of Scripture that he read at the opening of the Chapel 60 years ago.

The board in the north transept was also dedicated during the service. The board now bears the names of past Head Chapel Stewards and Chaplains.

Originally the board bore the names of Old Kingswoodians who have passed. At their 40th Reunion celebration in March 2022, the class of 1982 raised funds for the establishment of a Memorial Garden outside the Chapel so the names were moved to their new home.

We are grateful to the Class of 1982 who made both of these projects possible and have created two very special spaces for Kingswoodians to remember those lost and honour those who have served.

We give glory to God for all that He has done through the Chapel and may it continue to be the heart of Kingswood.

Messages from past Kingswood Chaplains

Messages from past Head Chapel Stewards

Honours Award [Rugby...
Nigel joined Kingswood College in January 2019 as a Bridging Year student. He a...
We will remember you...
It is with deep sadness that we have had confirmation from Ms. Noma Mrwetyana, t...
2021 New Pupils Indu...
Last night our New Pupils Induction Ceremony took place in our Chapel. Due to co...
Junior Trinity (Lond...
A number of of our Junior musicians took part in the Trinity Music Exams. Their...