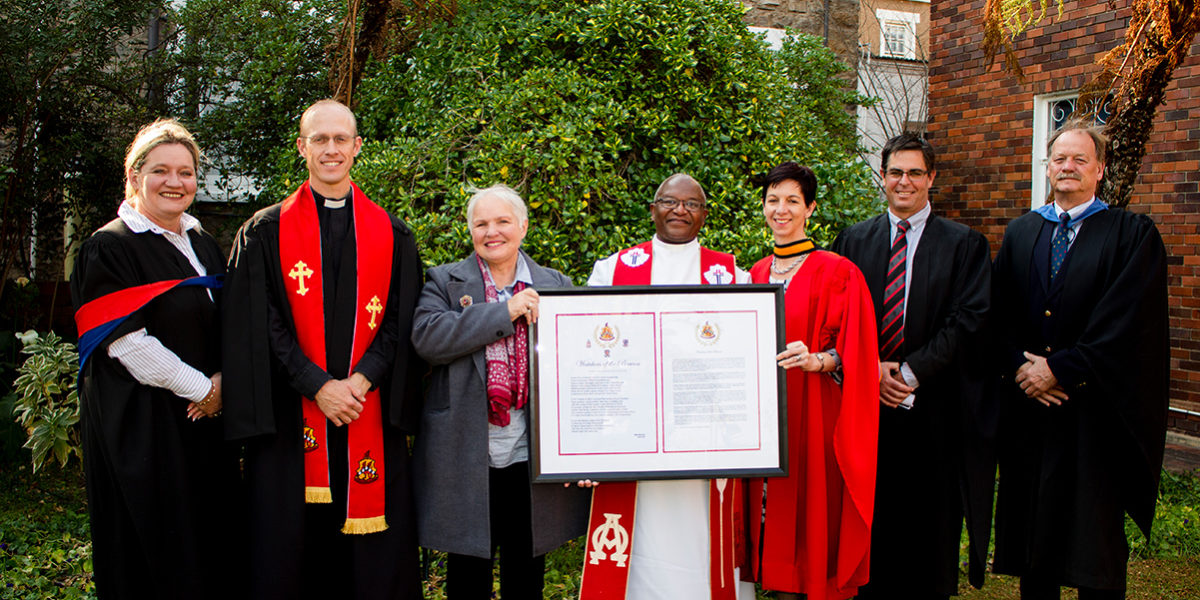 “They shall grow not old, as we that are left grow old. Age shall not weary them, nor the years condemn. At the going down of the sun, and in the morning, we will remember them.”

This morning our 57th Chapel Anniversary Service took place. The school gathered to mark the opening of the Chapel, 57 years ago and also to pay homage to those whose lives have been lost in various wars.

In this our 125th year, the celebration of this milestone is a significant one, as the Kingswood College Chapel truly is the heart of the school.

We had the honour and privilege of having Bishop Siwa in attendance and delivering the sermon. Bishop Siwa is the current President of the South African Council of Churches as well as the Presiding Bishop of the Methodist Church of Southern Africa. On this significant occasion, St Stithians College and Penryn College have bestowed on Kingswood a plaque to commemorate and mark our 125th year with a poem written by Ms Ruth Everson. The poem titled “Watchers of a Beacon” pays tribute to Kingswood’s history and acknowledges as fellow Methodist schools, the special bond which Kingswood shares with St Stithians and Penryn.

The Kingswood College family is greatly touched and humbled by this most gracious way in which warm and mutually beneficial Methodist family ties spanning over many generations, have been marked by St Stithians and Penryn High School.

This video was recorded and made by St Stithians and Penryn to mark this event.

“Watcher’s of a Beacon” by Ms Ruth Everson

A Tin Temple in Africa echoed the praises of just fourteen –
Then another, and another, and now a mighty roar
Lifts the wings of the wyvern over the City of Saints
To answer a cheerful call: Studia hilaritate proveniunt.
Gather the family together, this Kingswood walk of faith
Has carved a pilgrim path for a hundred years and twenty-five,
The light, held high by sons and daughters, still is kept alive.

From the distant valley of St Stithians,
To the top of a high Penryn hill,
A beam shines back to the black and red:
‘We are the watchers of a beacon
Whose light will never die.’

More about the poet:
Ms. Ruth Everson taught English for 39 years. Her teaching was always shaped by her passion for empowering others through leadership. As such, she served as the Leadership Director at St Stithians Girls’ College until 2018. Ms Everson has been published locally and internationally. She has two anthologies, Landscapes of Courage and No Fire on the Moon. Her poetry has taken her across South Africa as well as to Swaziland, Botswana and Egypt. She performed a commissioned poem in Beijing, China. She won the 2010 Woman and Home short story competition and was shortlisted for the Sol Plaatje European Union poetry award in 2017 and 2018. Ms Everson has been invited to speak in The Netherlands in August and to lead a poetry tour to the United Kingdom in 2020.

Cyclists undertake A...
“Ride As Much Or As Little Or As Long Or As Short As You Feel, But Ride!” – Edd...
Kingswood honours th...
This weekend as part of our Foundation Weekend celebrations, Kingswood will pay ...
Kingswood becomes fi...
Kingswood College is thrilled to announce its partnership with CoachEd Cricket. ...
The Gift of Art: Lin...
At Kingswood, we are so fortunate to be supported by a talented and highly-quali...