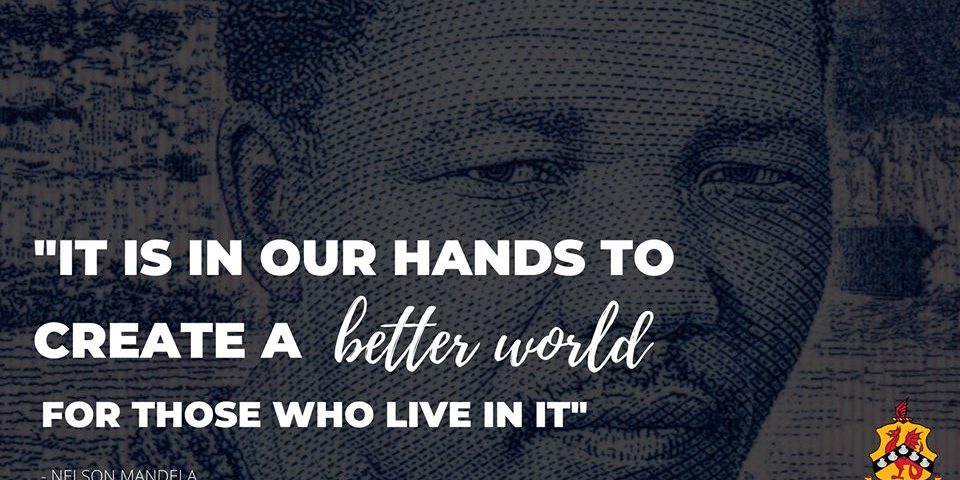 “It is in our hands to make a better world for those that live in it.” – Nelson Rolihlahla Mandela.

Our school, our country and indeed the entire world are facing one of the most devastating crises in human history. To despair would not be an unreasonable response. However, as we celebrate the life and legacy of Nelson Mandela today, the first president of a democratic South Africa, we would do well to consider his words quoted above, to guide our response to the present and perhaps future challenges we may face

Our Head, Dr Colleen Vassiliou also shares her thoughts with us on this Mandela Day:

As we acknowledge the passing of Nelson Mandela’s daughter, Zindzi Mandela and recognise that her funeral was held yesterday, we celebrate the life of her father today.

Gifford Thomas, the author of The Inspirational Leader, mentioned 7 points about why Nelson Mandela was a great leader. We can learn so much from this extraordinary man and so much of what he said is still applicable today.

One of our goals at Kingswood College is to grow leaders. We launched our Leadership Institute last year and we continue to nurture the characters of pupils so that they can go on to be ethical leaders.

According to Thomas, Nelson Mandela displayed self-sacrifice, compassion, a willingness to learn, servant leadership, and he was an ethical leader. Let’s review these qualities for a moment:

Nelson Mandela spent 27 years of his life on Robben Island. When offered freedom, he refused, saying: “I cannot and will not give any undertaking, at a time when I and you, the people, are not free. Your freedom and mine cannot be separated!”

Nelson Mandela forgave his greatest adversaries and brought about democracy for all South Africans.

3. He was willing to learn

While in prison, he not only threw himself into the routine of daily exercise, but he also read books on jurisprudence and politics, and books on gardening and horticulture, eventually cultivating food that fed, not only his fellow prisoners but also the prison officials.

Corruption is something we all struggle with but Mandela believed that an ethical leader is someone who does what is right, not what is popular.

When Mandela assumed power, he sought to bring all South Africans together. As a “great unifier” he displayed a “remarkable lack of bitterness.”

He served the poor and the rich; he served the educated and the illiterate. He viewed everyone as his brother and sister—even his enemies.

The media put him on a pedestal, but in reality, he was compassionate, kind, humble and shared his failures with others.

As we celebrate this great role model, I end with my favourite Mandela quotation: “Honesty, sincerity, simplicity, humility, pure generosity, absence of vanity, readiness to serve others – qualities which are within easy reach of every soul – are the foundation of one’s spiritual life.”

Pre-Primary Sports D...
"...If it's not fun, then you are not doing it right!..." Well if the above ...
Private schools to o...
As per the Government Gazette published on Friday 22 January, Independent School...
Kingswood Musician E...
One of our Kingswood Junior musicians, Victor took part in the Makhanda National...
Honours Award [Hocke...
Qhayiya has represented the Kingswood 1st Hockey side on 32 occasions having jo...