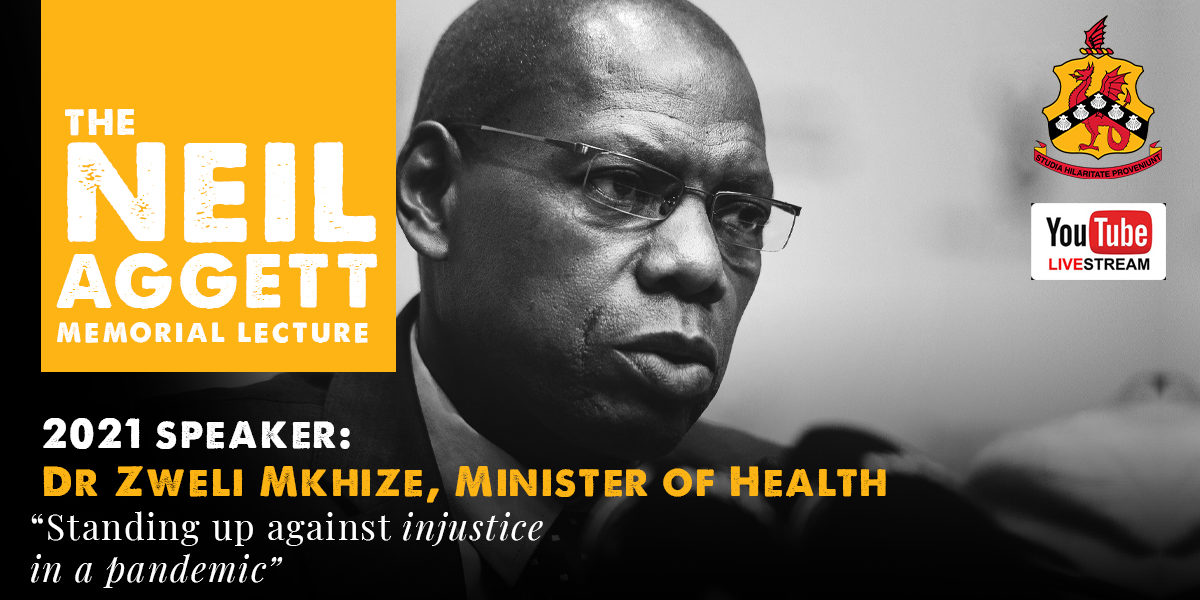 We are honoured to welcome Honourable Minister Dr. Zwelini L. Mkhize, South Africa’s Minister of Health as our speaker at the annual Neil Aggett Memorial Lecture. The title of the lecture is “Standing up against injustice”.

Every year Kingswood College hosts a memorial lecture in honour of Neil Aggett, a former pupil who paid the ultimate price during the anti-apartheid struggle for liberation. The lecture is a tribute to all those brave men and women who laid down their lives in the fight for human rights and social justice.

As the world continues the fight against the Covid-19 pandemic, Dr Mkhize has, since the beginning, been at the very centre of the invisible threat of Covid-19 for South Africa.

What does it mean to stand up against injustice in a global pandemic? Join us as we hear from Health Minister, Dr. Mkhize.

The lecture is going to be a hybrid event, hosted in the Kingswood Chapel and streamed live online to ensure that Covid protocols are strictly observed.

Due to the nature of Dr. Mkhize’s own commitments to the front-line flight against Covid in South Africa, he cannot be at Kingswood in person, his address will be virtual and delivered in the Chapel for selected grades, guests, and staff. The whole service will be live-streamed for guests and media.

*Hybrid events: to ensure that Covid protocols with regards to venue capacity are strictly observed, some events will be both online and in-person. Pupils will be informed as to which grades will attend in person where relevant, all others will watch the live-streamed event online.

Dr Mkhize was the longest serving Provincial Health member of the Executive Committee in the country. He had served as MEC for Health in KwaZulu-Natal from 1994 to 2004 and MEC for Finance and Economic Development from 2005 to 2009.

He returned to South Africa in 1991 and worked at Themba Hospital and he started his private practice in Pietermaritsburg in late 1991.

He also played an active role in the promotion of peace and stability in the KwaZulu-Natal. He was a leader of government business in KwaZulu-Natal.

Dr Mkhize did his internship at Mc Cords Hospital in Durban in 1983 and he worked at Edendale Hospital in Pietermaritsburg in 1984 before going into exile in 1986; where he continued with his medical practice in Swaziland and Zimbabwe.

Dr Zweli Lawrence Mkhize was the Premier of KwaZulu-Natal Provincial from 6 May 2009 until 22 August 2013. Zweli Mkhize was the Treasurer-General of African National Congress. He is the leader of Government Business in KwaZulu-Natal; member of the ANC’s National Executive Committee (NEC); a Chairperson of the ANC’s National Education and Health sub-committee and Chairperson of 2010 World Cup Political Oversight Committee.

Source: Office of the Premier